Stars being spit out of Black Holes Said Lou Baldin many moons ago.

The Milky Way's black hole is spewing out planet-size 'spitballs' 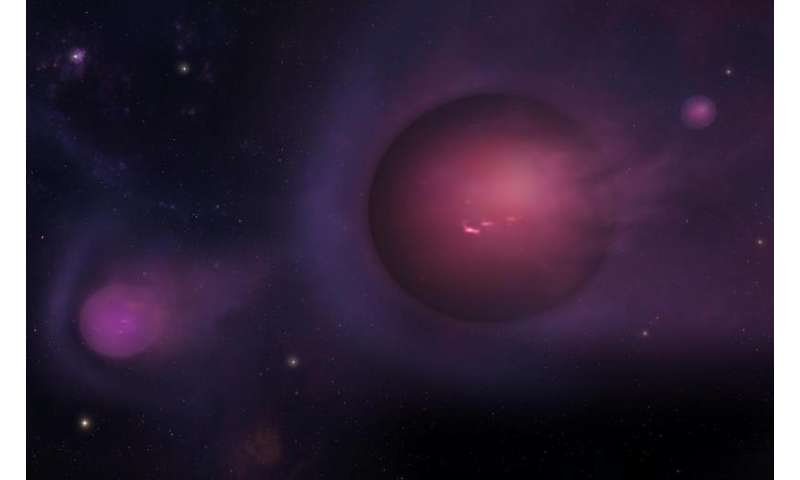 Every few thousand years, an unlucky star wanders too close to the black hole at the center of the Milky Way. The black hole's powerful gravity rips the star apart, sending a long streamer of gas whipping outward. That would seem to be the end of the story, but it's not. New research shows that not only can the gas gather itself into planet-size objects, but those objects then are flung throughout the galaxy in a game of cosmic "spitball."

Girma is presenting her findings at a Wednesday poster session and Friday press conference at a meeting of the American Astronomical Society."A single shredded star can form hundreds of these planet-mass objects. We wondered: Where do they end up? How close do they come to us? We developed a computer code to answer those questions," says lead author Eden Girma, an undergraduate student at Harvard University and a member of the Banneker/Aztlan Institute.
Girma's calculations show that the closest of these planet-mass objects might be within a few hundred light-years of Earth. It would have a weight somewhere between Neptune and several Jupiters. It would also glow from the heat of its formation, although not brightly enough to have been detected by previous surveys. Future instruments like the Large Synoptic Survey Telescope and James Webb Space Telescope might spot these far-flung oddities.
She also finds that the vast majority of the planet-mass objects - 95 percent - will leave the galaxy entirely due to their speeds of about 20 million miles per hour (10,000 km/s). Since most other galaxies also have giant black holes at their cores, it's likely that the same process is at work in them.
"Other galaxies like Andromeda are shooting these 'spitballs' at us all the time," says co-author James Guillochon of the Harvard-Smithsonian Center for Astrophysics (CfA).
Although they might be planet-size, these objects would be very different from a typical planet. They are literally made of star-stuff, and since different ones would develop from different pieces of the former star, their compositions could vary.
They also form much more rapidly than a normal planet. It takes only a day for the black hole to shred the star (in a process known as tidal disruption), and only about a year for the resulting fragments to pull themselves back together. This is in contrast to the millions of years required to create a planet like Jupiter from scratch.
Once launched, it would take about a million years for one of these objects to reach Earth's neighborhood. The challenge will be to tell it apart from free-floating planets that are created during the more mundane process of star and planet formation.
"Only about one out of a thousand free-floating planets will be one of these second-generation oddballs," adds Girma.
Headquartered in Cambridge, Mass., the Harvard-Smithsonian Center for Astrophysics (CfA) is a joint collaboration between the Smithsonian Astrophysical Observatory and the Harvard College Observatory. CfA scientists, organized into six research divisions, study the origin, evolution and ultimate fate of the universe.