What Will Happen When Gene Editing Is as Easy as Cut-and-Paste? 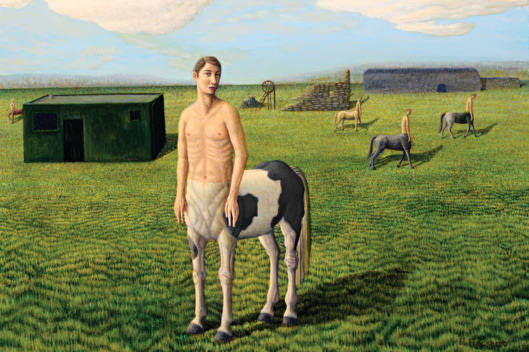 The other day, I found myself looking at a startling photo of my wife standing in the kitchen. The counter came up, exactly, to her waist, which was not itself so strange — I guess it’s sort of the point of counters — except for the fact that I occasionally stand there, too, and know that it also comes up to my waist, when I am actually ten inches taller. Of course, I’ve known for a while that my legs are preposterously short — for instance, it’s the way I explain to myself that while I can run a few seven-minute miles, the crazy hamster-wheel effort of churning that fast turns my sneakers into sweat sponges. When I went to find a pair of sneakers that could help, the salesman laughed — they don’t make shoes to help people like me, he said. But what if they made legs that did? What if gaining a few inches below the waist could be as simple as using colored contact lenses? And what if we could interpret that phrase — Gain a few inches below the waist — any way we wanted? While we’re at it, what if we could change our real eye color that easily too?

Perhaps you’ve heard of CRISPR — an enthralling bacteria-based gene-therapy technique that is spelled like a Silicon Valley joke, pronounced like the vegetable-drawer contraption in your aunt’s refrigerator, and promises, in fact, to so completely change the nature of our relationship to our own genes that Michael Specter’s recent account of it, in The New Yorker, was called “Humans 2.0.” They weren’t being all that hyperbolic: CRISPR is a way of dispatching a probe into a cell to seek out and modify a particular stretch of genetic code about a million times more efficiently, and much more cost-effectively, than has ever been possible before. It is often described as a genetic cut-and-paste tool: Using it, you can easily select any segment of DNA and replace or delete it. Which means that anything that’s genetic is editable, and since everything is genetic, at least partially, a whole lot of stuff might just be possible, from eradicating cystic fibrosis to (theoretically, anyway) gene-therapy sex changes. They’re already CRISPR-izing pigs to more easily grow human organs inside them for transplant. And, to fight malaria, unleashing an air force of reprogrammed mosquitoes.


CRISPR is not brand-new news, exactly — human gene therapy has been going on, in some way, since the 1990s, before we even cracked the genome, which gives you some sense of the speculative Wild West optimism of biotech back then (and, well, in general) — but it is quite big news. The old gene-therapy technologies were inefficient, ineffective, and cost thousands of dollars. A CRISPR edit costs as little as $30 at the moment, which makes it much more like cell-phone technology than nuclear bombs and means it is going to be very hard to contain. Which is why this spring, around the time of a chin-scratching “Radiolab” episode, there was a rally of bioethicists and sympathetic scientists to halt the technique before it got its hands on human embryos. Then, in April, Chinese researchers announced they’d done exactly that in an experiment that didn’t exactly work out.
Of course, there are good reasons to worry about editing the genes of embryos, since doing so could change the genetic course of the species (the new DNA would get passed down) and, presumably, even given the relatively low price, introduce an entirely new kind of class divide (assuming that gene therapy would confer an advantage to babies and not open them up, like little Pandora’s boxes, to crippling developmental problems, as the denouements of countless literary and cinematic depictions of genetic engineering have warned). But from the petri dish, a genetic transformation of the species takes at least one generation, one hypercontrolling set of parents at a time. And when it comes to cheap technology, a generation can be a very long time indeed — just think of cell phones, then consider the motivating power of human vanity, which is, after all, not just the desire to look one’s best but the satisfaction of exceeding what seemed like inherent limits. Frankly, far freakier to me, and possibly, in the short term, more momentous, is the use of gene therapy not in embryos but in adults. Lots of adults. Designer babies is one thing, and could mean the merciful end of countless maladies (and, yes, lead to countless more “enhancements” too). But truly proficient techniques could allow for genetic modifications at any stage of life. That’s cosmetic gene therapy — designer you.
It’s true, we’re not there yet. But remember, this is a world in which a world-famous stroke-stricken hockey player sneaks across the Mexican border to have stem cells injected into his spinal canal; in which millions of people routinely pump botulinum toxin into their faces; and in which so many women have died when the cement they’d inserted into their butts poisoned them that there are casually cartoonish slideshows of the victims online. I mean, there’s already an Indiegogo CRISPR-at-home campaign (admittedly, the kit is rudimentary).
Oh! And did I forget to mention that gene therapy in fully formed humans is already happening? A few weeks ago, British researchers announced they’d successfully rejiggered the immune system of a 1-year-old girl dying of leukemia to attack the cancer where even cutting-edge immuno­therapy had failed. (Layla being just the latest — and, given her age, most dramatic — case of an oncology patient cured by gene therapy.) Around the same time, the biotech company Editas announced it would be using CRISPR to treat a rare form of blindness beginning in 2017 — and it’s just the one that seems likely to win the race, beating out Intellia Therapeutics, CRISPR Therapeutics, and probably a hundred others. And that race for profits is on the feel-good end of the spectrum. On the feel-somewhat-queasier side: In August, Elizabeth Parrish — CEO of fledgling biotech start-up BioViva, with just $250,000 in venture capital—announced she’d recently returned from Colombia, where she’d received two different kinds of gene therapy, both directed at life extension: one to increase muscle mass and the other to produce telomerase, the protein that keeps chromosomes from shortening.
Parrish’s telomerase procedure was based on 2012 work that showed telomerase gene therapy could extend the life of mice by 20 percent. But there are already more radical applications in the air, especially in Silicon Valley, where our wealthiest and most imperious citizens are already obsessed with life extension and are likely to get excited about, say, this recent insight into yeast: A study published this fall suggested that simply switching off certain genes could extend life by 60 percent. “I am patient zero,” Parrish announced proudly in a Reddit AMA. She is almost certainly right. What athlete is going to take a glimpse at dogs made insanely muscular by CRISPR, photos of which were just released by Chinese researchers, and think steroids are anything but hopelessly out-of-date? Seriously, those beagles could play for the Jets.
It’s amazing to remember that however much genetics is the core of how we think of human life, the discovery of DNA happened so recently that one of the two guys responsible is still alive. For most of the years since, we’ve thought of genes as a stable code, a map of individual identity chambered securely somewhere in each of our cells — blueprints, from which everything else is extrapolated. But, beginning with the epigenetics research of the past decade, that conception is crumbling. As mind-bending as it might be to conceive of writing MS out of your genome shortly after experiencing your first tremors, or watching an athlete grow his heart in his 20s, when he needs it to perform, and shrink it in his 40s, when he doesn’t want to die from it, the CRISPR revolution is teaching us that genes may be less like blueprints than like infrastructure: necessary and mostly reliable but also as modifiable as a stretch of high-speed rail or the span of a bridge. And when it’s priced at $30, there’s just no way we’re not going to build that bridge. Really, we’re already walking across it, smiling and pretending we’re in control of those jacked-up puppies at the end of the leash. —David Wallace-Wells
Posted by Lou at 9:21 AM