A hole, where the sun doesn't shine...enough 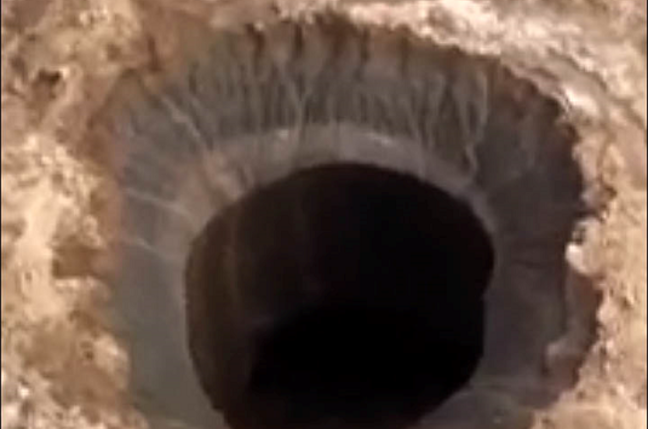 Global warming in Siberia? They wish. Milton said he made the hole, didn't think it was going to be such a big deal. All the media attention has him nervous. He's been stocking up on yoohoo, cases of the stuff, and hidden it in that hole. He doesn't think they will find his stash but if they did, there is no vodka in yoohoo, I told him. So his stash should be safe. No self respecting Russian would drink chocolate milk, I don't think, I sure the heck don't.

http://www.theregister.co.uk/2014/07/18/huge_mystery_siberia_crater_not_caused_by_aliens_or_meteor_govt_insists/
18 Jul 2014 at 11:39, Lewis Page
A huge, enigmatic crater which has suddenly appeared in a remote region of Siberia was definitely not caused by an unidentified object falling from space, the Russian authorities insist. 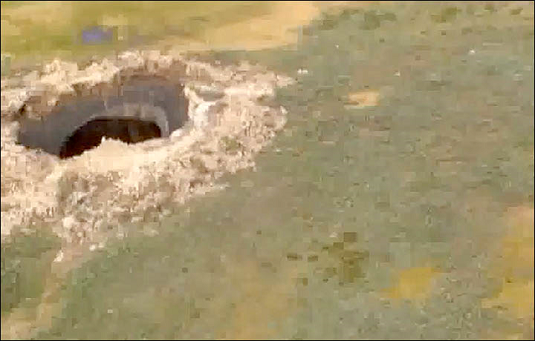 The mysterious crater seen from a passing helicopter. Credit: Konstantin Nikolaev
"We can definitely say that it is not a meteorite. No details yet," a tight-lipped official spokesman told the Siberian Times, reporting on the mystery crater. A team of government experts is apparently at the site now, with the mission of finding out exactly what did cause it.
However the Russian government does have an official theory as to what caused the strange crater, located on the remote Yamal peninsula, to appear.
Anna Kurchatova from Russia's Sub-Arctic Scientific Research Centre told the Times that a mixture of water, salt and gas could have formed underground due to melting permafrost as a result of global warming. This could then have ignited, with the resulting underground pressure causing the earth above to erupt with an effect "like the popping of a champagne cork".
Siberia is famous for its meteor strikes, including the Tunguska event of 1908 and the Chelyabinsk explosion of 2013 - though there are those who claim that these and/or other incidents actually involved alien spacecraft. 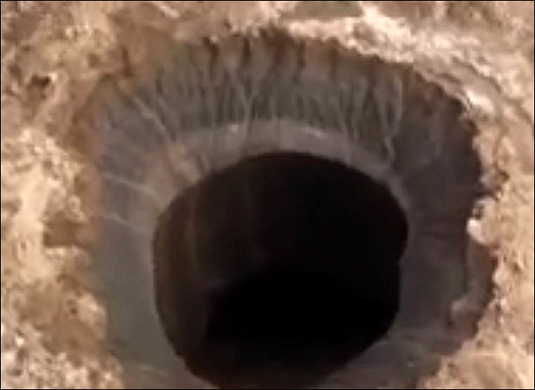 Definitely no sign of an explosion here. Credit: Konstantin Nikolaev
Unsurprisingly, internet blabber has leaned heavily toward aliens or space objects of some type as being behind the new Yamal crater. Such speculation will of course not be damped by any official government statements blaming marsh gas or global warming, as it is a standard tenet of UFO belief that governments always suppress genuine alien discoveries using such cover stories. The only official line likely to generate more disbelief would be to say that the crater was caused by a weather balloon.
Puzzlingly, another Russian government scientist, apparently a member of the team sent to the site, told the AP that there "were no traces of an explosion" to be seen there. ®
Posted by Lou at 11:45 PM