by Bob King on December 28, 2014
The half-moon creeps up on the planet Uranus this evening. The two will be near one another all night in the constellation Pisces but closest – less than one-third of a Moon diameter apart – around 11:45 p.m. (CST). The views are what you'll see in a pair of binoculars. The 4th magnitude star Delta Piscium is at top. Source: Stellarium 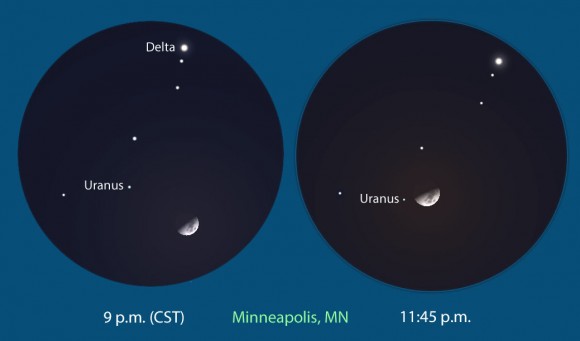 Yes, old news, happened yesterday. Man on the moon fist bumps man on Uranus. True story, if you don't believe me read the book, "A Day with an Extraterrestrial". It's all in there for those tired of the same old cool aid from the status quo institutions down here on Earth. We humans have received a double dose of cosmic mooning. Me thinks that the gods are trying to tell us something.

Sunlight. Moonlight. Starlight. I saw all three for the first time in weeks yesterday. Filled with photons, I feel lighter today, less burdened. Have you been under the clouds too? Let’s hope it’s clear tonight because there’s a nice event you’ll want to see if only because it’s so effortless.
The half-moon will pass very close to the planet Uranus for skywatchers across North America this evening Sunday, Dec. 28th. Pop the rubber lens caps off those binoculars and point them at the Moon. If you look a short distance to the left you’ll notice a star-like object. That’s the planet! 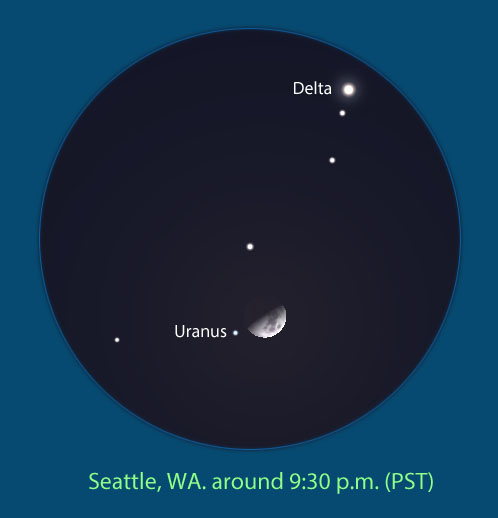 Seattle, two time zones west of the Midwest, will see the two closest around 9:30 p.m. local time. Source: Stellarium
You can do this anytime it’s dark, but the later you look the better because the Moon moves eastward and closer to the planet as the hours tick by. Early in the evening, the two will be separated by a couple degrees, but around 11:30 p.m. CST (9:30 p.m. PST) when the Moon reclines in the western sky, the planet will dangle like an solitary diamond less than a third of a lunar diameter away. When closest to the Moon, Uranus may prove tricky to see in its glare. If you hide the Moon behind a chimney, roofline or power pole, you’ll find it easier to see the planet.
The farther north you live, the closer the twain will be. Skywatchers in Japan, the northeastern portion of Russia, northern Canada and Alaska will see the Moon completely hide Uranus for a time. The farther west you are, the higher the Moon will be when they conjoin. West Coast states see the pair highest when they’re closest, but everyone will get a good view. 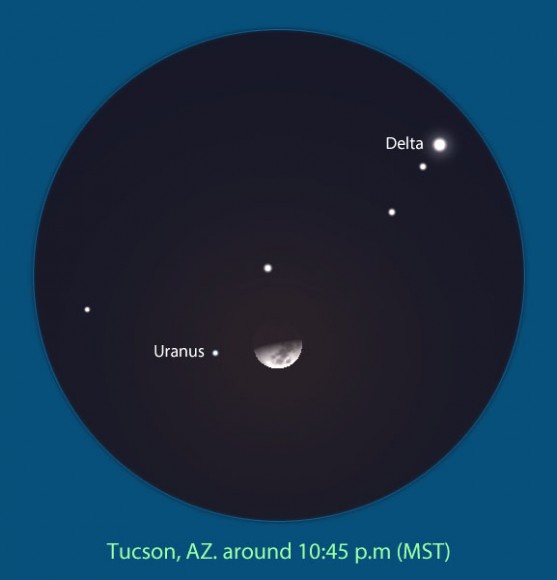 Binocular view from the desert city of Tucson around 10:45 p.m. local time tonight. You can see that the Moon is a little farther north of the planet compared to the view from Seattle. The 1,500 miles between the two cities is enough to cause our satellite, which is relatively close to the Earth, to shift position against the background stars. Source: Stellarium
When closest, the radically different character of each world can best be appreciated in a telescope. Pump the magnification up to 150x and slide both planet and Moon into the same field of view. Uranus, a pale blue dot, wears a permanent cover of methane-laced clouds where temperatures hover around -350°F (-212°C). 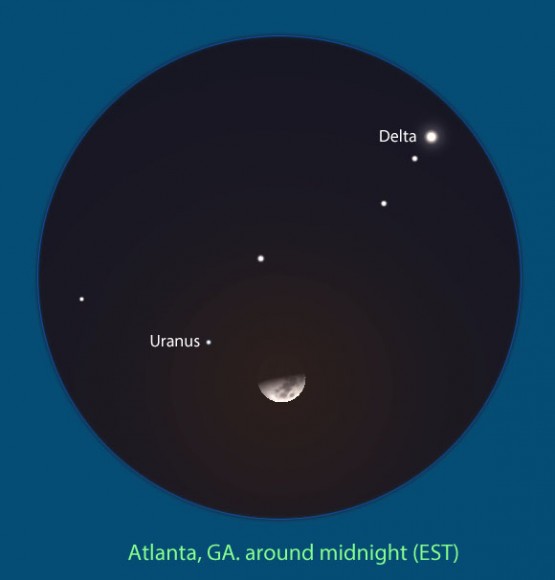 Though the Moon will be lower in the sky in the eastern U.S. and Canada when it’s closest to Uranus, observers there will still see planet and Moon only 1/2 degree apart shortly before moonset. Source: Stellarium
The fantastically large-appearing Moon in contrast has precious little atmosphere and its sunny terrain bakes at 250°F (121°C). And just look at those craters! First-quarter phase is one of the best times for Moon viewing. The terminator or shadow-line that divides lunar day from night slices right across the middle of the lunar landscape.
Shadows cast by mountain peaks and crater rims are longest and most dramatic around this time because we look squarely down upon them. At crescent and gibbous phases, the terminator is off to one side and craters and their shadows appear scrunched and foreshortened. 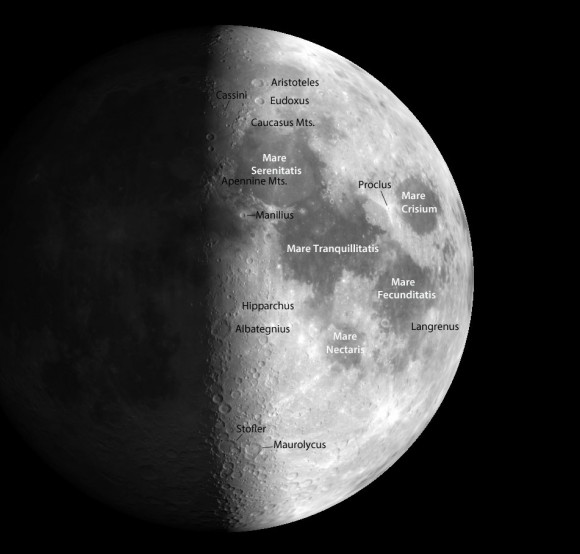 The day-night line or terminator cuts across a magnificent landscape rich with craters and mountain ranges emerging from the lunar night. Several prominent lunar “seas” or maria and prominent craters are shown. Credit: Christian Legrand and Patrick Chevalley / Virtual Moon Atlas
Enjoy the tonight’s conjunction and consider the depth of space your view encompasses. Uranus is 1.85 billion miles (2.9 billion km) from Earth today, some 7,700 times farther away than the half-moon.