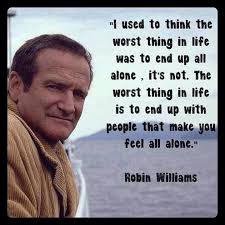 Robin Williams, a great guy, excellent comedian, came into this life with a gift, a gift that he was allowed to share with the world. A privilege that he earned from a previous life. But as is true with many gifted people that came into this world to enjoy "their" gift, such as Elvis Presley, Michael Jackson, John Belushi, Jimi Hendrix, and a slew of others, they were allowed to stumble and surround themselves with people that made them feel alone. Sad, because in this universe no one is ever alone. Ignored, yes, it happens to the best and worst of us.

Fame is a one shot deal. You can't take it with you after you die. Certainly, the legacy lives on in movies, soundtracks, books and in the hearts of those touched by the celebrity. But the celebrity is no more. Like everyone, their soul can move up or move down. If they move down they will miss their former fame (for a time), if they move up the fleeting, ego-based-fame, carries little spiritual meaning in the ego-free higher dimensional realms. All gifts are laced with ego. A lower level catch 22.