'Revolutionary' Physics: Do Sterile Neutrinos Lurk in the Universe?

The mass that makes up matter eludes 3d minds to no end. It's there, here, everywhere and nowhere, all at the same time, confounding the brightest minds that spend their lives chasing after mysterious and elusive mass that might as well be pixie dust. Everyone, well, physicists mostly, presume that matter, the thing that makes up what we can see, taste, feel, hear and debate over endless cups of coffee, at the lab, has real mass (whatever the hell mass is, that is). Let's just simplify things, there is no mass honey (not even in honey). Everything we humans can see, taste, feel, hear, grow or build, and whatever else, has no mass. So put that in your massless cereal bowl. Sure, particles interact, and act as if there are particles that have mass (magnetism, polarity, weak and strong forces, gravity bending of photons (light) and an endless string of other slacker-type and bizarre particles that seem to have no purpose in life whatsoever). The illusion of interaction via magnetism and other strange phenomena has all of humanity fooled big time.  However, chasing the little quantum gremlins pays well all the same, thank you. It's so funny when you hear people (vast majority) say that they don't believe in paranormal stuff, and only believe in tangible things, those things they can see, feel, hear or eat (and are dam proud of being blessed with superior intellect and able to discern between real and hallucination). Hilariously (or not), such so called real things are spawn of the strangest paranormal stuff in 3d land, neutrinos. lol


A completely new subatomic particle — one so reclusive and strange that it passes undetected through ordinary matter — could be lurking in the universe.
If so, a detector set to turn on later this year could find the first convincing evidence for the particle, called a sterile neutrino. The new experiment, whose 30-ton detector was recently lowered into place at Fermi National Accelerator Laboratory in Illinois, will look for traces of this elusive particle transforming into another type of neutrino.


Unlike the Higgs boson, the particle thought to explain why other particles have mass and which most physicists predicted should exist for decades, sterile neutrinos would be in the realm of completely unknown physics that only some physicists believe exist, said Bonnie Fleming, the experiment's spokeswoman and a physicist at Yale University. "It would be completely revolutionary," Fleming said. [Wacky Physics: The Coolest Little Particles in Nature]
Ghostly particles
Neutrinos are miniscule, nearly massless subatomic particles that form during nuclear reactions in the hearts of stars, supernovae and other explosive cosmic events. Though trillions of neutrinos pass through our bodies every second, they almost never interact with other matter, giving them the nickname "ghost particles."
The known neutrinos come in three different types, or flavors — electron, muon and tau — and in the last 15 to 20 years, scientists have learned that those flavors oscillate, or change into one another, with a certain frequency. (During collisions, electron neutrinos can also turn into electrons, muon neutrinos can transform into muons, and tau neutrinos can turn into tau leptons, particles that are similar to electrons.
But a few hints suggest there could be a totally new type of neutrino out there. For instance, experiments in the 1990s to detect neutrinos from the sun found possible evidence that electron neutrinos were disappearing. Another experiment designed to probe neutrino oscillation found extra electron neutrinos appearing. One explanation for these anomalies is that the neutrinos were morphing into an intermediate particle called a sterile neutrino. 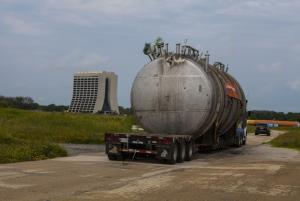 The 30-ton argon detector has been under construction for two years.
If such sterile neutrinos exist, they would interact only with matter through the incredible weak force of gravity, making direct detection impossible, Fleming told Live Science.

Hunting sterile neutrinos
So starting late this year or early in 2015, Fleming and her colleagues will look for indirect evidence of sterile neutrinos. The experiment, called MicroBooNE, will shoot a beam of pure muon-flavored neutrinos 0.3 miles (0.5 kilometers) through a 30-ton metal tank filled with argon. Though most of these ghost particles will travel through the argon unchanged, some will occasionally change flavor to an electron neutrino, tau neutrino — or possibly a sterile neutrino.
Some fraction of these neutrinos will then go on to collide with the nuclei of argon atoms in the detector.
"They will shatter that nucleus, and parts of that nucleus will go everywhere," said Matt Strassler, a physicist at Harvard University who was not involved in the study. As part of the collision, electron neutrinos will sometimes morph into electrons, Strassler added.
The detector then identifies where, when and what type of particles were created by analyzing the trail left by ionized, or charged, particles after the collision.
Because the researchers know how often electron neutrinos should convert into electrons during such collisions, any deviation from expectations could be a sign that a muon neutrino morphed into an intermediate sterile neutrino, then into an electron neutrino, and finally into an electron.
Longshot physics
Though the discovery of a sterile neutrino is a possibility, it's not likely, Strassler said.
MicroBooNE is working to clarify tantalizing hints in data from a precursor experiment called MiniBooNE, but there's a good chance that MiniBooNE's "dirty measurement" is picking up other processes instead, Strassler said.

Even if the new experiment uncovers something strange, there's no guarantee sterile neutrinos caused the signal, rather than some other completely different interaction, he said.
"There's a very small — not zero — chance that they're actually going to uncover one of the great secrets of the universe," Strassler told Live Science.