Is NASA a bit apprehensive about the kinds of life lurking in the cold, dark, deep recesses of this solar system?

NASA "people" would never admit to fearing the stuff of science fiction that has haunted the minds of humans even before the advent of fiction books and movies, all the way back to the stone age. NASA's sole existence is to deny all intelligent extraterrestrial shenanigans...and the realities of such capable beings existing in our solar system. And are well compensated (paid) for keeping the lid on all things paranormal and unexplainable to the human masses. NASA protects humans from knowing anything about the hood.
NASA believes there could be lots of space objects (moon and earth size planets) out there (on the fringes of this solar system). NASA has no idea how they got there or what they are or made of or what purpose they might serve (In NASA's defence, they are truly clueless of most of the facts concerning "everything"). NASA postulates several theories in this article about where planets and other strange objects originated from but miss the target by light years and are nowhere near even an inkling to reality. These solar objects "all" came out of the sun (and some of the planets), which has been belching, birthing freakish material into the solar system and beyond for a long long time (as I have been saying for a long time). All these "planets" and other things, regardless of size have life on them (as NASA is starting to realize...with some apprehension). Some of that life came preexisting with no natural biological tags or crosshairs for understanding. The kind of life that most humans would not enjoy making acquaintance with, I might add. Me be pitching a book that has yet to be written, NEVER!

On March 26, researchers announced the discovery of 2012 VP133, an estimated 280-mile wide (450-kilometer) object that lies just beyond the Kuiper Belt of icy objects that swarm outside of Neptune's orbit.


The new object is nicknamed "Biden" after the vice-president of the United States, because both Joe Biden and 2012 VP133 are "VPs." It is one of only two dwarf planets discovered beyond the Kuiper Belt, with Sedna (a decade ago) being the other one. The paper, "A Sedna-like body with a perihelion of 80 astronomical units," was published in the journal Nature.
Mapping tiny worlds at the Solar System's edge could one day show scientists how life arose on Earth. That's because many of these objects could contain organics, carbon-based material that are ingredients for life. [Strangest Places Where Life Is Found On Earth]
As the scientists continue their search, they expect that 2012 VP133 will be the first of a series of discoveries of such objects. Finding such a world has a value of its own, but the team is also thinking of a greater astrobiological question as they study 2012 VP133. Are the possible organics —which show up as ultra-red material in telescopes — a possible source for life on Earth? And could be this be true of other planetary systems as well?
"One of the questions I've had is trying to map out what is this ultra-red material in the Kuiper Belt," said Scott Sheppard, a faculty member at the Carnegie Institution for Science, Department of Terrestrial Magnetism (DTM) in Washington, D.C.
Sheppard co-discovered the object along with the Gemini Observatory's Chadwick Trujillo.

Curiously enough, 2012 VP133 has none of this material on it, but Sedna does. It will take more discoveries of such objects to figure out if ultra-red material is common outside of the Kuiper Belt, and how organics could have been transported to Earth early in our Solar System's history. 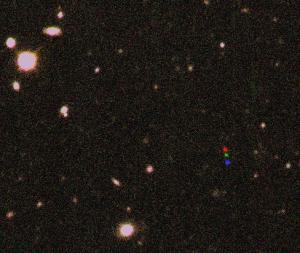 The discovery images of 2012 VP113 combined into one frame. The red, green and blue dots show its pa …
A treasure trove of possible organics
Most dwarf planets found to date — including Pluto, which was once considered a planet — reside in the Kuiper Belt, a vast collection of frozen objects that orbit our Sun about 30 to 50 astronomical units (AUs) away. One astronomical unit is the distance between the Earth and the Sun, about 150 million kilometers.
There are millions of objects in the Kuiper Belt, but the ones that interest Sheppard and his colleagues are those that have "resonances" with Neptune. An orbital resonance occurs when two bodies — like a planet and a moon, or a planet and an asteroid — exert gravitational influences on each other that put them into closely related orbits.
In a 2012 paper in the Astronomical Journal, "The Color Differences of Kuiper Belt Objects in Resonance with Neptune,"Sheppard examined 58 Kuiper Belt objects that have a resonance with the gas giant.
He found that those resonant objects that are embedded in the Kuiper Belt are full of this ultra-red material, indicating likely organics. On the edge of the belt, some of those objects also still have the material, showing that it is somehow leaking into the inner Solar System. Those that are quite far away, however, show none of the material.
Sedna and 2012 VP133 are well beyond the boundaries of the Kuiper Belt. Sheppard's new paper argues that they are part of the edges of the Oort Cloud, a theorized icy collection of objects extending thousands of AUs away from Earth. (The Oort Cloud is perhaps best known for being the supposed source of many comets that fly into the inner solar system.)

The discovery images of 2012 VP113, taken with the Dark Energy Camera (DECam) on the CTIO 4 meter te …
It's difficult to envision how dwarf planets such as Sedna and 2012 VP133 could receive ultra-red material from the Kuiper Belt because they are so far away from it. Further, it's unclear why only Sedna (of the two dwarf planets known in that region) has the material. They're too far away for Neptune to have any influence on them. So what happened? [New Dwarf Planet Photos: Images of 2012 VP113]
Determining what resonants have and do not have ultra-red material helps us understand how the ultra-red material has moved around the outer Solar System,” said Sheppard.
A big jolt

Looking at other objects, it becomes clear that something big likely disturbed some of them. For example, Sedna's weird orbit got the attention of researchers because it is so eccentric. The dwarf planet ranges between 80 AU and 940 AU — meaning that one orbit takes about 11,400 years to complete. It's by far the most eccentric orbit in the Solar System.
"It probably formed much further in and somehow got scattered out there and captured into the no-man land area," Sheppard said.
Sheppard and Trujillo then compared Sedna's and 2012 VP133's orbits with 10 representative Kuiper Belt objects that have eccentric orbits. To their surprise, they found that all 12 of them had almost identical "arguments of perihelion." That's an orbital parameter that measures the angle between two points in each object's orbit: the closest approach to the Sun, and the location where the objects cross the plane of the Solar System. 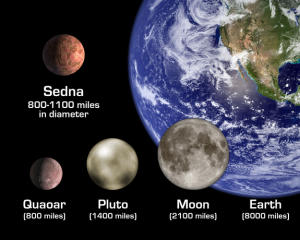 Comparisons of some of the dwarf planets with the Earth and the moon.
"They should just have random arguments of perihelion," Sheppard said.
The similarities point to a giant disturbance causing chaos. There are three theories for this. Perhaps a rogue planet (Earth's size or smaller) was ejected out of the Solar System, throwing smaller objects aside as it passed into the outer Solar System.
"That rogue planet could have been ejected or it could be out there today," Sheppard said.
He said it would be too dim to show up in surveys, such as NASA's Wide-field Infrared Survey Explorer (WISE), a spacecraft more suited to finding gas giant planets, which emit their own heat.
Another theory — the leading one — says a passing star about 200 AU from our own caused huge gravitational disturbances. It seems easy to explain a star tugging on the wandering Sedna, but VP113 has a more circular orbit that only goes as far as 266 AU.
"That makes VP113 more tightly bound to the Sun, and it's harder to form that from a stellar encounter," Sheppard said. "It would have to be stronger or a bigger object, so it's less likely to have happened."

The third — Sheppard termed it the "dark horse" theory — suggests the Sun captured extrasolar planets from another star early in the Sun's history, while it was forming in a cloud of gas and young stars.
Hundreds of objects waiting for discovery
As Sheppard wrestles with the question of how the ultra-red material moved around, he's also interested in learning more about the nature of the material itself. Researchers suspect it's organics, but what sort of organics is of great interest. Luckily, there's a chance to take a closer look.
NASA's New Horizons probe is currently sailing to the outer Solar System. It's expected to make a pass by Pluto and its moons in 2015 before zooming toward the Kuiper Belt. After the Pluto encounter is finished, perhaps the spacecraft could turn its observations to an ultra-red object. No candidates have been identified yet, but this is a possibility, Sheppard said.
Sheppard's search of the outer Solar System will continue. He and his collaborators have some suspected new objects that need confirmation, and better yet, his research estimates that there could be at least 900 objects in the Oort Cloud's fringes that are at least 621 miles (1,000 km) in diameter — a little less than half of Pluto's size.