A tweak here, a gene there, add a pinch of gold and POW! 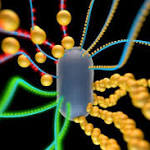 When ufo nuts talk about living materials, such as what is found inside UFOs, and UFOs themselves, and other fantastical stuff, laughs and rolling of the eyes happens in the scientific community and the community in general, who lap up every new discovery as if it never existed before. Plain and simple a double standard is at work. A child when starting out in school is taught the basics (ABCs and numbers, 1,2,3,4 etc. And believe in their little minds that such information is new, fresh and mysterious. For them it is. Much of the laughable stuff in the past has materialized and become everyday items that modernday people couldn't imagine living without. Cars, airplanes, smartphones, computers, internet porn, etc. Once upon a time all that stuff was unthinkable, magical, work of the devil and speaking such sacrilegious stuff...not funny but damnable. Things haven't changed much... lol


http://www.theregister.co.uk/2014/03/23/mit_makes_living_couch_from_ecoli_bacteria/
In a few years your chair could be made of a living material, according to a team of MIT boffins who have worked out how to get bacteria to help them manufacture items.

The breakthrough was announced on Sunday in the Synthesis and patterning of tunable multiscale materials with engineered cells academic paper published in academic journal Nature. The research is another step in a new frontier of research that seeks to make the organic world just as programmable as the digital.

"What we've been able to achieve here is use living cellular communities to organize and make non-living material systems," explained MIT associate professor Timothy Lu in a chat with The Register. "My thought is that the tools of synthetic biology can be used to program cellular systems to make new materials from the bottom up."
Specifically, the MIT researchers were able to put bacteria to work producing conducting biofilms, some of which were studded with quantum dots, and arranging gold nanowires. This paves the way for the development of mass manufactured cell-based material factories, and even "living materials" that have some of the desirable properties of bones or trees, Lu confirmed.
They were able to do this by using E. coli, which naturally creates biofilms containing amyloid fibril proteins which, somewhat like the hooks in Velcro, help it attach to surfaces. The hooks on this gloopy velcro are made from a repeating chain of protein units called CsgA, which can be modified by adding peptides, which can be used to let parts of the film capture specific materials, like gold nanoparticles.
For their experiment, the researchers disabled E. coli's ability to produce CsgA and replaced it with a genetically engineered strain that would produce it only when a molecule named AHL was present, letting them control where and when the bacteria produced a biofilm.
They then engineered another strain to produce CsgA with a particular peptide made of polyhistidines, but only when another molecule named aTC was present. If gold nanoparticles are added to the sludge, they will bind to the histidines on the peptides.
This gave the researchers two knobs to dial on the bacteria, and by adding or reducing the amount of AHL and aTc in the modified E. coli's environment they could precisely control not only the production of biofilm, but also the production of biofilm that would grab hold of any gold added to the mix. By doing this, they were able to create a framework for building gold circuits.
"Amyloid fibrils assembled by cells constitute a versatile scaffold that can co-organize and synthesize fluorescent [Quantum Dots] as well as gold nanowires, nanorods and nanoparticles," the researchers write.
The researchers also made tentative steps toward being able to delegate control of the manufacture of circuits down to the bacteria itself by taking inspiration from ant colonies.
"The bacteria secrete small molecules they use to communicate with each other," explained Lu. "We co-opted that comm module [and] told one group of bacteria to tell the other group of bacteria when to turn on the other's creation of bacteria. Over time the more of the signal is present the more comes out of the received cell. Over time more and more of the material will be dominated by what the receiver cell is making."
This is is similar to behavior seen in ants "all the time," Lu said, and enthused: "There's no master architect behind it. There's emergence in this property."
"Thus, we have demonstrated an engineered cellular platform that synthesizes and patterns self-assembling materials with controllable functionality, structure and composition," the researchers explained in the academic paper discussing the research.
In the future, the team plans to explore the mass manufacture of materials using this method, and Lu has plans to explore the use of other "photosynthetic material" so that the assembly bacteria can make use of the sun's energy.
Lu imagines a long-term future where scientists (and later, companies) can create materials which can extract energy from the world around them.
"Linking up to other easily accessible resources in the environment could be one way of making materials that could self-sustain themselves in the real world," he explained.
Given this breakthrough, what could a potential application of this research field be? Lu's "most radical" idea is a living chair, he said.
"Everything around us is pretty much dead," Lu continued. "Imagine having a chair where you sit on it for a long time and it remodels to support areas of stress."
Posted by Lou at 6:39 PM