You can't blame astrophysicists for grasping at straws, what else they got to do with those expensive cool toys they get to play with all day long (I'm green with envy).  Only a couple of years ago it was discovered that the moon had ice on it, and the moon is next door for crying out loud. Scientists have no idea what the moon is or what it's made of, but some claim to know what the hell was going on 14 billion years ago in the distant past (if a little green alien told them such things, then it would be believable lol). One has to admire the audacity (the balls it takes) to make such absurd claims over and over again about the universe when they have ZERO evidence (only ufo nuts are allowed such discrepancies). But in the scientific world a whole bunch is at stake, with budget cuts and all looming.
Pulitzer prize has even been suggested for coming up with yet another dumbass "theory". The only reason I'm commenting on this latest parade of the grand human illusions is the cool looking picture of the afterbirth of the so-called Big Bang...For the thousandth time, there was no big or little bang, no God particle, or a pot of gold at the end of a rainbow. Unless you can fool most of the people all of the time, then the pot of gold is real. No surprise I smell Pulitzer Prize!

Astronomers have found the first direct evidence of cosmic inflation, the theorized dramatic expansion of the universe that put the "bang" in the Big Bang 13.8 billion years ago, new research suggests.


If it holds up, the landmark discovery — which also confirms the existence of hypothesized ripples in space-time known as gravitational waves — would give researchers a much better understanding of the Big Bang and its immediate aftermath.
"If it is confirmed, then it would be the most important discovery since the discovery, I think, that the expansion of the universe is accelerating," Harvard astronomer Avi Loeb, who is not a member of the study team, told Space.com, comparing the finding to a 1998 observation that opened the window on mysterious dark energy and won three researchers the 2011 Nobel Prize in physics. [The Big Bang to Now in 10 Easy Steps]
A team led by John Kovac, of the Harvard-Smithsonian Center for Astrophysics, is announcing the results today (March 17), unveiling two manuscripts that have not yet been submitted to peer-reviewed journals. To understand just what the detection of an inflation "smoking gun" would mean, a little background about the universe's first instants is in order. Kovac's team will discuss the results in a news conference today at 12 p.m. EDT (1600 GMT).
The universe grows up
The brief and astonishing inflationary epoch transformed the infant universe from mere quantum fluctuations into something of macroscopic size, adherents of the theory say.
Beginning just 10 to the minus 35 seconds (roughly one trillionth of a trillionth of a trillionth of a second) after the universe's birth, the idea goes, space-time expanded incredibly rapidly, ballooning outward faster than the speed of light. (This did not violate Albert Einstein's theory of special relativity, which holds that nothing can move faster than light through space, since inflation was an expansion of space itself.) 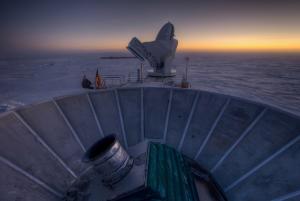 The sun sets behind BICEP2 (in the foreground) and the South Pole Telescope (in the background).
Basic inflation theory has been supported over the years by several different space missions that mapped out the cosmic microwave background (CMB), the ancient light that began saturating the universe about 380,000 years after the Big Bang. (Before this time, the universe was a sizzling fog of plasma and energy too hot for photons to travel freely.)
While the CMB contains tiny temperature variations, it is, for the most part, strikingly uniform across the entire sky — a property that bolsters the inflation concept, researchers say.
"Why the cosmic microwave background temperature is the same at different spots in the sky would be a mystery if it was not for inflation saying, well, our whole sky came from this tiny region," Chuck Bennett, principal investigator of NASA's Wilkinson Microwave Anisotropy Probe (WMAP) mission, told Space.com last year. "So the idea of inflation helps answer some of these mysteries, and it explains where these fluctuations came from."
But astronomers had never claimed to find a smoking gun for inflation — until now.
Polarized light
The smoking gun is a type of polarization in the CMB known as "B-modes." The spectacular expansion of the universe during inflation produced gravitational waves, which, in turn, generated the B-modes, according to the theory. 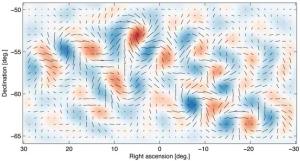 Gravitational waves from inflation generate a faint but distinctive twisting pattern in the polariza …
So multiple teams have been hunting for the B-modes; indeed, Bennett last year referred to their detection as "the current Holy Grail of the business." In the new study announced today, Kovac and his team report that they have spotted the characteristic swirls of B-mode polarization using the BICEP2 telescope in Antarctica. (BICEP is short for "Background Imaging of Cosmic Extragalactic Polarization.")
The researchers made ultrasensitive maps of the CMB over about 2 percent of the sky, taking advantage of BICEP2's great observing site.
"The South Pole is the closest you can get to space and still be on the ground," Kovac said in a statement. "It’s one of the driest and clearest locations on Earth, perfect for observing the faint microwaves from the Big Bang."
Einstein predicted the existence of gravitational waves in 1916, as part of his theory of general relativity. The new find represents the first direct evidence of these primordial space-time ripples, researchers said.
This is probably a direct image of gravitational waves across the entire sky, showing us the early universe," Kovac told Space.com.
Knowing how big the potential discovery is, Kovac and his colleagues pored over the BICEP2 dataset for several years to be sure the signal wasn't some kind of artifact generated by the telescope's instrumentation.

The tiny temperature fluctuations of the cosmic microwave background (shown here as color) trace pri …
"We're very confident that the signal that we're seeing is real, and it's on the sky," he said.
Still, Kovac knows that a great deal of scientific scrutiny is sure to follow.
"It's going to be controversial," he told Space.com. "We can expect that people will try to shoot at it from every direction, and we invite that — that's the scientific process, and it'll be fun and interesting."
"I'm sure there will be lots of discussion about galactic foregrounds and whether they could possibly be fooling us, be totally different than we'd expected," Kovac added. "But our paper goes into some detail on using all the best available models for what galactic foregrounds ought to look like, and why what we see doesn't look like that."
Loeb said he finds the team's data and arguments compelling. But wide acceptance of the find will likely only come if other instruments, such as the European Space Agency's Planck spacecraft, spot the signal in the CMB as well, he added. [Gallery: Planck Spacecraft Sees Big Bang Relics]
"I think the most exciting thing to watch out for is in the next few months, to see what, for example, the Planck team will say about it," Loeb said. "It may take them time, because they're in the midst of analyzing their polarization data. But it would be very important for confirming or disputing this claim."
In addition to providing strong support for inflation theory, the new BICEP2 observations reveal some details about the inflation process itself.
For example, the strength of the B-mode signal suggests that inflation occurred at tremendous energy levels — levels so high that all of the major forces in the universe, except gravity, were unified at the time, Loeb said.
Still, there is much more to learn about our universe's first few moments. For example, astronomers still have no idea what the substance that propelled inflation — dubbed the "inflaton" — actually is, Loeb said.
"It's not yet a victory of theoretical physics that we see evidence for a process that took place early on," he said. "We really need to understand what this substance — this inflaton — is. And until we do that, it's just like dark matter or dark energy — we give it a name, but we don't know what it is."