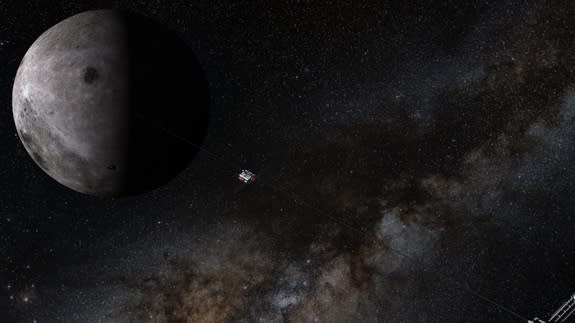 The moon has resources that humans need on Earth to bring mankind to the next technological phase, and for expanding space exploration to planets, moons and space cities. Wow, what a coincidence, just happened by some evolutionary accident of nature that we have such a huge warehouse chock full of rare earth elements, precious metals and minerals, all the stuff humans need at this stage of existence, at our finger tips...waiting for us!

Like a baby attached to its mother-load by an umbilical cord. All by design. Just don't tell that to the intellectual crowd too drunk on Darwin's cool aid.


http://news.yahoo.com/futuristic-moon-elevator-idea-takes-aim-lunar-lifts-113723205.html
An elevator to the moon might not be as crazy as it sounds.

A moon-based elevator to space could radically reduce the costs and improve the reliability of placing equipment on the lunar surface. Such a lunar elevator would make the transport of supplies and materials from the surface of the moon into the Earth's orbit and vice versa possible. Indeed, valuable resources could be extracted from the moon, then sent into Earth orbit more easily than if they were rocketed from the Earth's surface. You can see a video of how a moon elevator to space might work on Space.com.

It's no pie in the sky project according to the LiftPort Group of Seattle, Wash. A LiftPort strategic framework calls for establishing an operational Lunar Space Elevator Infrastructure (LSEI). The project would involve commercial, off-the-shelf technology, a Sputnik-like simplicity and a single heavy-lift launch solution.
Infrastructure
LiftPort's concept for building the lunar space elevator infrastructure calls for using a climbing vehicle that scoots up and down a ribbon-shaped, tethered cable that's part of an anchor station secured to the airless moon.

A lunar elevator provides value by making soft landings on the moon possible.
The group envisions a rocket launched from Earth to a Lagrange Point PicoGravity Lab, where cargo is transferred to the robotic lifter and gently delivered to the moon's surface.

Once fully functioning, the lunar elevator could soft-land equipment and people on the moon's landscape. Using forecast models, backers of the LSEI see transport of three-dozen people to the moon per year as attainable in the early years of the elevator's operation. 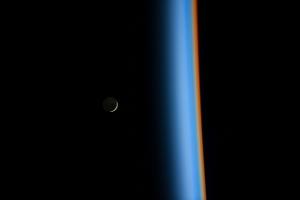 "We're making steady progress," said Michael Laine, president of the LiftPort Group.
"I think the moon has gotten a lot of new attention in the last year," Laine told Space.com. He has been encouraged by NASA's newly announced Lunar Cargo Transportation and Landing by Soft Touchdown (Lunar CATALYST) program, which is intended to spur commercial cargo transportation capabilities to the surface of the moon.
Moreover, funds from a recent Kickstarter campaign have enabled LiftPort to focus on the lunar elevator idea, Laine said.
Still, Liftport sees challenges, as summarized in Laine's credo on the group's website: "There is a profound difference between difficult, very, very hard, and impossible."
On the very, very hard side of things, Laine also has his eyes on a more ambitious project. "Of course, we also plan an elevator on the Earth and Mars, but that's going to take a little longer," Laine said.
Challenges ahead
One would think that spotting a space elevator here on Earth is hard enough, never mind the moon. 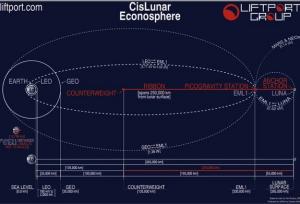 Inner workings of an operational Lunar Space Elevator Infrastructure (LSEI).
"The prospects for the Earth space elevator are brighter now … but there are challenges remaining," said Jerome Pearson, president of STAR, Inc., based in Mount Pleasant, S.C. He is an early originator and supporter of space elevator concepts. [Moon Master: An Easy Quiz for Lunatics]
Pearson said that the tough-to-do challenge list includes at least a few items: producing the vast quantities of high-strength carbon nanotube composites required; the dynamics of the 100,000-km-long structure; and the problems of debris in low Earth orbit that could destroy the space elevator ribbon.
Pearson's ElectroDynamic Debris Eliminator (EDDE) project aims to do something about the space debris. He believes the EDDE, a maneuvering spacecraft, could remove all the dangerous debris — over 10 centimeters (4 inches) in diameter — from low-Earth orbit by about 10 to 15 years from now.
But the long and short of it, Pearson said, is that engineers need to understand the dynamics of such lengthy structures before they can risk building the Earth space elevator. "And that is one of the drivers for the lunar space elevator," he told Space.com.
Pave the way 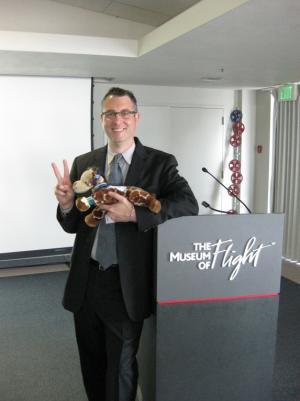 Michael Laine and the Lunar Space Elevator project’s mascot, LSEI (Lunar Space Elevator Initiative), …
"Lunar development will provide for mining regolith, lunar polar water and possibly helium-3 for nuclear power," Pearson said. "So I fully expect that we will have a lunar space elevator by around 2025, and that it will pave the way for building the Earth space elevator," he concluded. [Visions of the Future of Human Spaceflight (Photos)]
Moon reclamation
A letter-writing campaign to the U.S. Congress, initiated by lunar scientists late last year, has urged reclaiming the moon for both scientific and commercial use.

In part, the letter to lawmakers said that exploration and utilization of the moon "is not simply a box to be checked any more than exploration of the Western U.S. was in the 1800's. We believe that if we accept the waning of this nation's supremacy in space exploration, and if we ignore the moon, there will be profoundly adverse effects on U.S. economic growth and national security."
Among key talking points, the letter said that the moon has abundant resources "that can be used to dramatically reduce the cost of solar system exploration, and can also be used to stimulate new industries and technologies (i.e., creating new jobs) for mining, extracting, storing and using these resources to facilitate cislunar industry and exploration beyond the moon."
Game-changing technology
The Earth's moon is a treasure trove of mineral resources, such as precious metals, rare earth elements, helium-3 and oxygen for propellants," said Charles Radley, a technical advisor to the LiftPort Group. However, landing on the moon currently carries a high price tag. But by using modern fibers, space agencies could construct a lunar elevator that reduces the cost of lunar landing six-fold, he said.
The lunar elevator represents a "game-changing technology" that will open up the moon to commercial mining, Radley said. "The lunar elevator could reduce the cost of lunar mining of some commodities to a par with terrestrial mining," he told Space.com
Furthermore, a lunar-situated elevator makes the cost of collecting material from the moon and sending it to Earth essentially free, Radley said. The lunar elevator will pay for itself after 19 payload cycles.
Celestial commodities
On that score, Radley envisions several celestial commodities will become available via the moon. For example, use of lunar oxygen, he said, would reduce the cost of geosynchronous spacecraft launch by about seven times.

Then there's helium-3, which today sells for a million dollars per ounce on the secondary market. Demand far exceeds supply. "It is abundant on the moon but rare on Earth. U.S. supplies are rationed by the White House and will be exhausted by 2030," he said.
Turning to rare earth elements (REEs) that are vital to defense and high technology industries, Radley said that today, 96 percent of REEs come from China.
"There are few alternatives, but the moon is one," Radley said.
For more information on the LiftPort's proposed lunar elevator concept, go to: http://liftport.com/
Posted by Lou at 10:24 PM