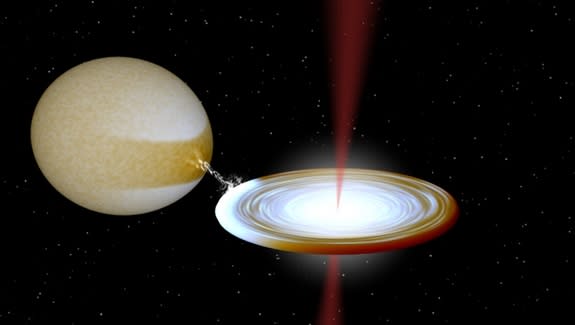 Contrary to popular beliefs such as what is in this article, black holes created all the stars inside of galaxies. Black holes are the mechanisms that recycle old stars into new stars creating and expelling massive amounts of stars and materials into space (under everyone's noses, in a blink of an eye), in perpetuity (never ending). And the question on everyone's mind is, "who threw the switch to start the galactic in perpetuity machine, smarty pants." The same beings that created the chicken so that it could lay eggs (the chicken came first, then the eggs). btw, I like my eggs scrambled. "Who created the beings that created the galaxies and the egg laying chickens, smarty pants?" Drum roll please...they always existed...scrambled eggs with the scrambled mind, anyone?

http://news.yahoo.com/winds-black-holes-pack-surprisingly-strong-punch-200448408.html
By by Charles Q. Choi, SPACE.com Contributor 17 hours ago
Black holes can blast their surroundings with much stronger winds than previously thought, scientists say.

The discovery will help better model the evolution of black holes over time, and help uncover the huge influence they can have on their host galaxies.
Black holes are objects with gravitational pulls so powerful, not even light can escape. Black holes grow when gas and dust in space flows or accretes onto them — this matter gets so hot it glows hot with radiation such as X-rays. [Strangest Black Holes in the Universe]
The amount of radiation flowing out from a black hole cannot exceed a certain level known as the Eddington limit or this radiation will blow gas flowing inward away. This limit is based on the black hole's mass.
However, whether the amount of kinetic energy from a black hole, in the form of jets and winds, was constrained by the same limit was unclear. Insights on these jets and winds is crucial for understanding the critical role black holes can play in their host galaxies — for instance, they could blow on gas hard enough to keep stars from forming.
To help solve this mystery, scientists investigated the black hole called MQ1 at the center of its host galaxy, M83, for more than a year. The galaxy lies about 15 million light-years away from Earth in the constellation Hydra, and is one of the closest and brightest spiral galaxies in the sky, visible with only binoculars."This powerful black hole is in a famous nearby galaxy that has been looked at gazillions of times, but was never spotted or never noticed,"study lead author Roberto Soria, an astrophysicist at the International Center for Radio Astronomy Research located in Perth, Australia, told Space.com.
It took a combination of optical, X-ray and radio observations from the Hubble Space Telescope, the Chandra X-ray Observatory and the Australia Telescope Compact Array to find MQ1. "Only when you put all three images together does this black hole really stand out," Soria said.
By analyzing the gas flowing into the black hole, they inferred its weight as less than 100 times that of the sun. The researchers compared the mass of the black hole with its outgoing kinetic power, which they estimated by looking at how bright its surroundings are with infrared and radio waves — the brighter the surroundings, the more kinetic energy jets and winds from the black holes must be slamming them with.
The scientists discovered the amount of kinetic energy flowing out from this black hole was perhaps two to five times higher than the Eddington limit for a black hole of this mass. "The little mass that is squirting out travels at a speed approaching the speed of light," Soria said.
Scientists had suspected that even small black holes such as MQ1 could produce huge amounts of kinetic energy. Now they have proof."We have finally shown that even a small one can be so powerful," Soria said. "In our models, we will have to pay more attention to the huge influence black hole jets have in the evolution of young galaxies, even small black holes that maybe would have been ignored in the past."
Black holes with such a huge jet power are very rare in the nearby universe "so finding one is exciting and helps us understand them better," Soria said. "We will look at more galaxies a bit further away, up to 50 million light years, to try and discover more of those."
The scientists detailed their findings online Feb. 27 in the journal Science.
Posted by Lou at 9:10 AM