Space Dust Is Filled with Building Blocks for Life 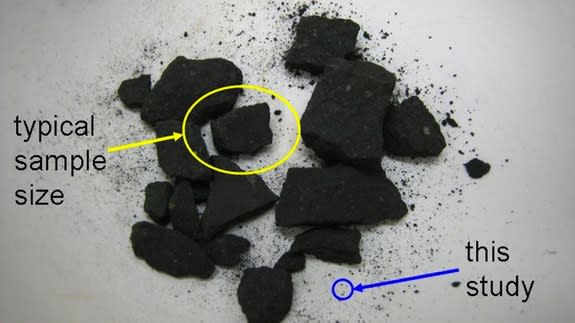 When it becomes publically known, sometime down the road when humans have colonized some of the planets, moons and meteors, the extent of "intelligent" life that existed in this solar system will stun the imagination. numerous civilizations have come and gone in eons past, up to this era. But little of what used to be in this solar system exists now. In comparison to the past, this solar system is dead, as far as activity goes.  "Mars, the real story", if I ever get around to writing the book will be a game changer...Nah...too few people take seriously this UFO nut stuff. The vast majority of people are nowhere near ready for any meaningful disclosure. It will take a few more generations and some alien artifacts, the ones that don't get intentionally destroyed (to protect the public), before a smidgeon of the truth comes out...and then believed...most people need more than tangible proof to believe. Believe it or not.

http://news.yahoo.com/space-dust-filled-building-blocks-life-121320470.html
A study of teeny-tiny meteorite fragments revealed that two essential components of life on Earth as we know it, could have migrated to our planet on space dust.

Researchers discovered DNA and amino acids components in a smidgen of a space rock that fell over Murchison, Victoria, in Australia in September 1969. Previous studies of the meteorite revealed organic material, but the samples examined then were much larger. This study would lend more credence to the idea that life arose from outside of our planet, researchers said in a statement.
"Despite their small size, these interplanetary dust particles may have provided higher quantities and a steadier supply of extraterrestrial organic material to early Earth," said Michael Callahan, a research physical scientist at NASA's Goddard Space Flight Center in Greenbelt, Md. [5 Bold Claims of Alien Life]
Amino acids are the basis of proteins, which are structures that make up hair, skin and other bits of living creatures. DNA is a molecule that contains information on building and running an organism.
Size matters
Meteorites such as Murchison are rare types of space rocks: the carbonaceous chondrites make up less than 5 percent of meteorites found on Earth, NASA said. Further, the molecules discovered in these space rocks are usually in miniscule concentrations of parts-per-million or parts-per-billion.
These factors have researchers questioning how significant the carbon-rich rocks themselves were in bringing life to Earth. Space dust, however, is more plentiful as it is constantly available from comets and asteroids shedding debris in their travels through the solar system.
The Murchison study (a proof of concept for further work, the researchers say) found life's building blocks in a sample that weighed about the same as a few eyebrow hairs. The 360-microgram sample was about 1,000 times smaller than a typical sample analyzed by researchers.
Samples from space
This micro-sample required a more sensitive technique than usual to extract the information scientists needed. A nanoflow liquid chromatography instrument organized the molecules, which were then ionized with a nanoelectrospray for analysis in a mass spectrometer.
NASA and other agencies have dealt with small sample sizes before, such as on the Stardust mission that collected particles from Comet Wild-2 and returned them to Earth in 2006. Researchers anticipate the techniques they are using today could be used for other missions in the solar system, especially for sample-return missions.

"This technology will also be extremely useful to search for amino acids and other potential chemical biosignatures in samples returned from Mars and eventually plume materials from the outer planet icy moons Enceladus and Europa," said Goddard astrobiologist Daniel Glavin, who was co-author on the research.
The study, led by Callahan, was recently published in the Journal of Chromatography A.
Posted by Lou at 10:53 AM