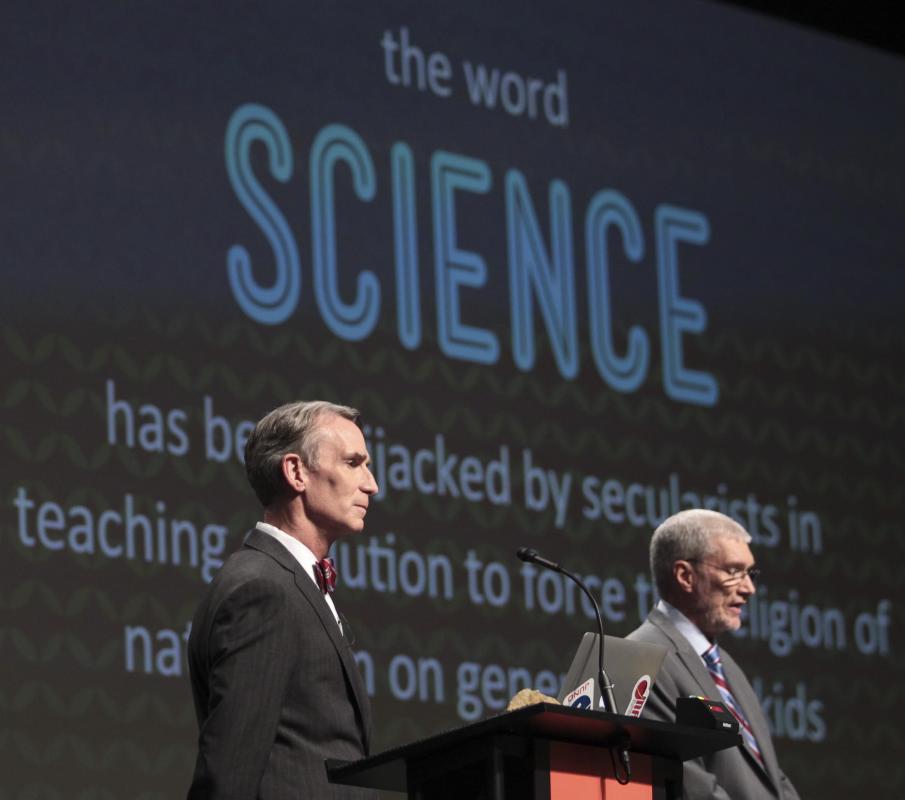 The blind leading the blind. Darwinism is just another religion. And all religions are hoaxes.

It's a crazy world when UFO nuts are the only sane people on the planet.


PETERSBURG, Ky. (AP) — True to his passionate and animated TV persona, "Science Guy" Bill Nye tapped on the podium, threw up his hands and noted that science shows the Earth is "billions and billions" of years old in a debate at a Kentucky museum known for teaching that the planet's age is only 6,000.

Nye was debating Creation Museum founder Ken Ham and promoting science in the snappy way that made him a pop culture staple as host of "Bill Nye The Science Guy" in the 1990s.
The event was meant to explore the age old question, "How did we get here?" from the perspectives of faith and science.
Ham, an Australian native who has built a thriving ministry in Kentucky, said he trusts the story of creation presented by the Bible.
"The Bible is the word of God," Ham said. "I admit that's where I start from."
Nye delivered a passionate speech on science and challenged the museum's teachings on the age of the earth and the Bible's flood story. Like most scientists, Nye believes there is no credible evidence that the world is only 6,000 years old.
"If we accept Mr. Ham's point of view ... that the Bible serves as a science text and he and his followers will interpret that for you, I want you to consider what that means," Nye said. "It means that Mr. Ham's word is to be more respected than what you can observe in nature, what you can find in your backyard in Kentucky."
The event drew dozens of national media outlets and about 800 tickets sold out in minutes. Ham said ahead of the debate that the Creation Museum was having a peak day on its social media sites.
"I think it shows you that the majority of people out there, they're interested in this topic, they want to know about this, they don't want debate shut down," Ham said before the debate.
At times, the debate had the feel of a university lecture, with slides and long-form presentations.
Responding to an audience question about where atoms and matter come from, Nye said scientists are continuing to find out.
Ham said he already knows the answer.
"Bill, I want to tell you, there is a book that tells where atoms come from, and its starts out, 'In the beginning ...,'" Ham said.
Nye said there are plenty of religious people around the world who don't question evolution science.
"I just want to remind us all there are billions of people in the world who are deeply religious, who get enriched by the wonderful sense of community by their religion," said Nye, who wore his trademark bow tie. "But these same people do not embrace the extraordinary view that the Earth is somehow only 6,000 years old."
The debate drew a few Nye disciples in the audience, including Aaron Swomley, who wore a red bowtie and white lab coat. Swomley said he was impressed by Ham's presentation and the debate's respectful tone.
"I think they did a good job outlining their own arguments without getting too heated, as these debates tend to get," he said.
Some scientists had been critical of Nye for agreeing to debate the head of a Christian ministry that is dismissive of evolution.
Jerry Coyne, an evolution professor at the University of Chicago, wrote on his blog that "Nye's appearance will be giving money to organizations who try to subvert the mission Nye has had all his life: science education, particularly of kids." Coyne pointed out that the Creation Museum will be selling DVDs of the event.

The debate was hatched after Nye appeared in an online video in 2012 that urged parents not to pass their religious-based doubts about evolution on to their children. Ham rebutted Nye's statements with his own online video and the two later agreed to share a stage.
Posted by Lou at 12:50 PM