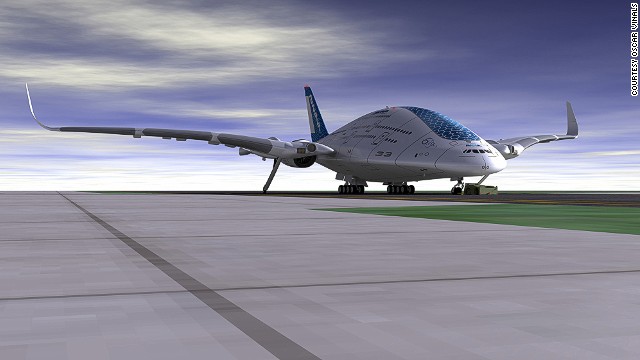 Such modes of transportation (and many far more fantastic) exist in many places in this galaxy. The technology is coming to earth via humans that have come from far away places, even though they have no recollection of previous lives, they do have the ideas in their heads from previous lives.

Give a designer and aviation geek some time and a pencil, and you might just get something great.

At the very least you'll get something spectacular.

Oscar Viñals, a Spanish designer and aviation enthusiast, has released details, and incredible pictures, of what he is calling the "greenest aircraft imaginable."
Inside the world's strangest-looking airplane
Equipped with self-repairing wings, large windows, a vertical takeoff ability and room for 755 passengers, the "AWWA Sky Whale" joins several other outlandish proposals for future aircraft that have cropped up in the last couple of years.
Airbus predicted we'd be flying in transparent planes by 2050, while pilotless planes and space flight have also been forecast .
Viñals' design uses hybrid engine technology and "active wings," among other things, to create a plane that, should it ever get built, will not only look great but will be one of the safest and most efficient planes in the sky.
Posted by Lou at 9:10 AM