The Birth of a Planet, Observed From Earth

Since then many pictures from NASA, the few that NASA lets out (they keep the best stuff for themselves) and some amateur astronomers, have taken photos that show, prove, that the sun is proactive in creating all the mass in the solar system, including planets. Much of the material ejected by the sun ends up in the outer reaches of the solar system where some of it migrates back towards the sun as comets, asteroids and hemorrhoids, and sometimes planets and moons. Gas giant planets also eject material and moons into the solar system.

With mounting evidence that suns give birth to planets scientists should begin to realized that the "accretion theory" of planet formation is wrong...not that most people give a hoot where a planet comes from, or where a tomato comes from for that matter, well we all know that tomatoes come from the grocery store, duh. 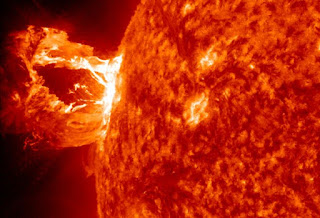 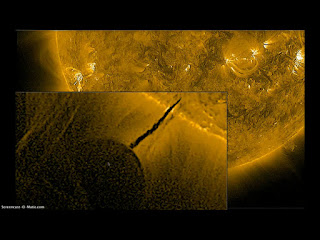 The Birth of a Planet, Observed From Earth
February 28, 2013 Two views of the gas and dust around star HD 100546, via PopSci. Left: a visible-light image from the Hubble Space Telescope. Right: an infrared image from the Very Large Telescope. In both, the red cross marks the location of the new protoplanet. (ESO/NASA/ESA/Ardila et al.)

http://www.theatlantic.com/technology/archive/2013/02/the-birth-of-a-planet-observed-from-earth/273618/
How do planets form? The most commonly accepted explanation is the nebular hypothesis: Dust grains circling around a parent star collide, the hypothesis goes, and develop into larger objects through a process of accretion. But one reason the hypothesis remains a hypothesis is that it's incredibly hard to observe the phenomena it's trying to explain: We haven't actually been able to witness the birth of another planet from our perch here on this one. We take the evidence we have -- the stuff we can observe -- and reverse-engineer.
Now, though, researchers claim to have spotted a planet in the first pangs of its birth, and they've shared their findings in a paper [pdf] published in the journal Astrophysical Letters. Relying on pictures captured by a high-resolution infrared camera -- which was linked to the European Southern Observatory's Very Large Telescope in Chile -- the team observed what seems to be a planet in the midst of a disk of gas and dust that surrounds its central star, HD 100546 -- a star located in the Milky Way, 335 light years away from Earth. The protoplanet is about as massive as Jupiter, and, like Jupiter, a gas giant.
The team believes the new planet is so new that it could be the youngest we've ever observed. While there have been other probable protoplanets that have been contenders for "youngest planet" honors -- objects discovered in 2011 and 2012, respectively -- those bodies seem to be further ahead in their development than the one forming near HD 100546. "They have already cleared a big gap in the disk of their host stars," Quanz explains.
So if the team's observations hold up, the finding would be one of the first direct observations of the earliest stages of a planet's birth. But: if they hold up. The team, Quanz says, still needs to confirm that the data it gathered actually suggest a forming planet. (Another possible explanation for their observations, he notes, is that the object in question is actually being ejected from its solar system, rather than being born into it -- since data suggest that HD 100546 has another planet orbiting closer to it, which could result in ejection for one of the two.) But if there is a protoplanet out there, we'll have a long time to study it: It would, the researchers note, take tens of thousands of years to mature from its current, infantile state. As Quanz sums it up: "If we are correct, this is the first time we are seeing a planet forming inside its natal environment."
Posted by Lou at 8:58 AM