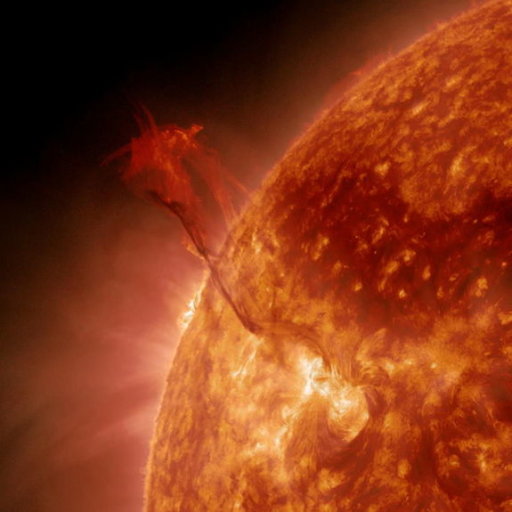 And they say fire breathing dragons are mythological creatures.


http://news.yahoo.com/sun-grows-super-hot-dragon-tail-amazing-nasa-212050577.html
A NASA spacecraft studying the sun has recorded amazing video of a giant plume of super-hot plasma erupting from the star's surface, only to crash back down hours later.

The solar plasma eruption, which NASA scientists nicknamed a "Dragon Tail," rose up from the sun's surface today (Jan. 31) and was spotted by the agency's Solar Dynamics Observatory, a powerful spacecraft that constantly records the sun's weather in different wavelengths of light.
A video of the Dragon Tail solar eruption shows a tendril of solar plasma, which scientists call a "filament," extending across the northeastern face of the sun over the course of four hours. Near the end of the event, the filament begins to break apart.
"Some of the plasma was released into space but not all could escape the gravitational pull of the sun," SDO mission officials explained in a video description. "It's not surprising that plasma should fall back to the sun. After all, the sun's gravity is powerful. "
Filaments are plasma formations on the sun sculpted by the star's intense magnetic field, with one end anchored to the sun's surface. The other end can extend through the sun's outer atmosphere, called the corona, hundreds of thousands of miles into space.
Filament structures typically last about a single day, though stable ones can exist for months at a time, SDO officials explained. The plasma in filaments consists of super-hot helium and hydrogen that is electrically charged, they added.
NASA's Solar Dynamics Observatory is one of several spacecraft constantly monitoring the sun for signs of solar flares, eruptions and other space weather events. The sun is currently in an active phase of its 11-year solar weather cycle and is expected to reach its peak activity period in 2013. The current sun weather cycle is known as Solar Cycle 24.
Posted by Lou at 8:50 AM