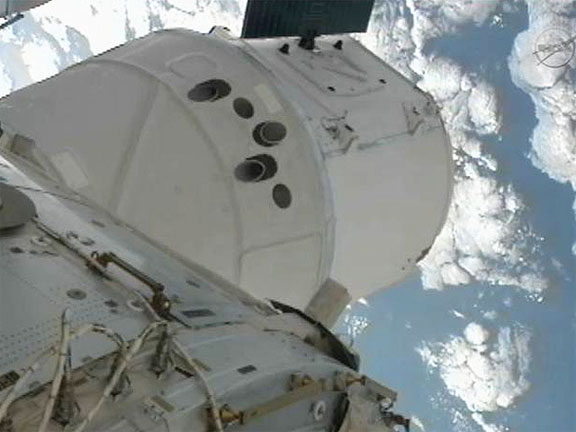 One small step for private enterprise, one huge leap forward for humans in space...in the year of the Dragon. Dragons have been maligned throughout history but one source got some of it right. From the penguin dictionary of symbols, "Dragons are the winged stallions of the immortals."

For the second time this year, a SpaceX Dragon spacecraft is at the...
...International Space Station. Expedition 33 crew members Akihiko Hoshide and Sunita Williams grappled Dragon and attached it to the station, completing a critical stage of the SpaceX CRS-1 cargo resupply mission. Hoshide used the station’s robotic arm to capture Dragon and guide it to the station’s Harmony module, and then Expedition 33 Commander Williams installed Dragon to Harmony’s common berthing mechanism, enabling it to be bolted in place for an expected 18-day stay at the station. Upon capture, Expedition 33 Commander Sunita Williams of NASA remarked, “Looks like we’ve tamed the Dragon.” Grappling was complete at 6:56AM ET, and at 9:03AM ET Dragon was attached to the space station. Following its capture, the spacecraft was attached to the Earth-facing port of the Harmony node.
“This is a big moment in the course of this mission and for commercial spaceflight,” said SpaceX CEO and Chief Technical Officer Elon Musk. “We are pleased that Dragon is now ready to deliver its cargo to the International Space Station.”
Next, the station crew will pressurize the vestibule between the station and Dragon and open the hatch that leads to the forward bulkhead of the spacecraft. The crew will then begin unloading Dragon’s cargo, which includes crew supplies, vehicle hardware, experiments, and an ultra-cold freezer for storing scientific samples. The mission, designated SpaceX CRS-1, is the first of at least 12 that SpaceX will perform under NASA’s $1.6 billion Commercial Resupply Services contract. Only SpaceX’s Dragon spacecraft is capable of carrying significant amounts of cargo to the station and returning cargo to Earth.The station crew could open the hatch to Dragon as early as Wednesday afternoon to begin unloading its cargo. The capsule is scheduled to spend 18 days attached to the station before returning for a splashdown in the Pacific Ocean off the Southern California coast.Dragon delivered 882 pounds of supplies to the orbiting laboratory, including 260 pounds of crew supplies, 390 pounds of scientific research, 225 pounds of hardware and several pounds of other supplies. Dragon will return a total of 1,673 pounds, including 163 pounds of crew supplies, 866 pounds of scientific research, and 518 pounds of vehicle hardware and other hardware.Dragon is expected to be released from the space station on October 28th with return cargo that will include used station hardware and more than a ton of scientific samples. Splashdown and recovery in the Pacific Ocean off the coast of southern California will follow the same day.There was also an anomaly with one of the Falcon 9 launch engines. The mission, the first of at least 12 to the International Space Station under the company’s cargo resupply contract with NASA, started on Sunday, October 7th, with the launch from Cape Canaveral, Florida.As a result of shutting down one of its nine engines early just after the launch, the Falcon 9 rocket used slightly more fuel and oxygen to reach the target orbit for Dragon. For the protection of the space station mission, NASA had required that a restart of the upper stage only occur if there was a very high probability (more than 99 percent) of fully completing the second burn. While there was sufficient fuel on board to do so, the liquid oxygen on board was only enough to achieve a roughly 95 percent likelihood of completing the second burn—Falcon 9 did not attempt a restart.Although the secondary payload, the Orbcomm satellite, was still deployed to orbit by Falcon 9, it was done so at the lower altitude used by Dragon in order to optimize the safety of the space station mission.SpaceX and NASA are working closely together to review all flight data so both parties can fully understand what happened with the engine—those lessons will then be applied to future flights.SpaceX achieved the goal of repeatedly getting into orbit by creating a careful, methodical and pragmatic approach to the design, testing and launch of their space vehicles. There will be a most careful examination of what went wrong and how to best address the engine failure and additional information will be provided when such becomes available.
Posted by Lou at 9:21 AM