Moon formation: Was it a 'hit and run' accident?

Scientists have created the god particle out of consensus with each other, even though such a particle does not exist. They can do that with the moon too. They have lots of money to play with and only need come up with any reasonable theory that people can swallow, and with a little consensus from colleagues thrown in, voila, they have a solution, and more importantly, more grant money to play with. Life is good in the can't lose scientific community. I don't blame scientists, we the people demand answers and will fund institutions to come up with the answers, even if they have to make them up. It's a well oiled self-perpetuating illusion making machine that requires little effort and only a tweak here and there by the illusive behind the scenes extraterrestrials.


Scientists have proposed a fresh idea in the long-running debate about how the Moon was formed.

What is certain is that some sort of impact from another body freed material from the young Earth and the resulting debris coalesced into today's Moon.


But the exact details of the impactor's size and speed have remained debatable.

In a report online to be published in Icarus, researchers suggest that the crash happened with a much larger, faster body than previously thought.

Such theories need to line up with what we know about the Moon, about the violent processes that set off the creation of moons, and what computer simulations show about the more sedate gravitational "gathering-up" that finishes the job.

In recent years, scientists' best guess for how the Moon formed has been that a relatively slowly moving, Mars-sized body called Theia crashed into the very young Earth.

That would have heated both of them up and released a vast cloud of molten material, much of which cooled and clumped together to give rise to the Moon.

That would suggest that the Moon is made up of material from both the early Earth and from Theia, which should be somewhat different from one another.
Impact factor
What complicates that story is a number of observations of "isotopic compositions" - the ratios of naturally-occurring variants of some atoms - taken from the Earth and from lunar samples. 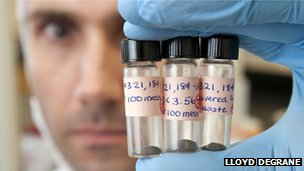 The mix of similar and different "isotope ratios" confounds the issue

While the Moon has an iron core like Earth, it does not have the same fraction of iron - and computer models supporting the Theia impact idea show just the same thing.

However, the ratio of the Earth's and the Moon's oxygen isotopes is nearly identical, and not all scientists agree on how that may have come about.

Confounding the issue further, scientists reporting in Nature Geoscience in March said that a fresh analysis of lunar samples taken by the Apollo missions showed that the Moon and the Earth shared an uncannily similar isotope ratio of the metal titanium.

That, they said, gave weight to the idea that the Moon was somehow cleaved from the Earth itself.

Now, Andreas Reufer, of the Center for Space and Habitability in Bern, Switzerland, and colleagues have run computer simulations that suggest another possibility: that a far larger and faster-moving body made an even more glancing blow with the young Earth.

They said this body would have lost only a small amount of material and most of it would have continued on after the "hit-and-run".

That results in a much hotter disc of debris from the collision, but matches up with what would be needed to make a Moon-sized body.

The authors suggest that since most of what became the Moon would have been liberated by the impact from the Earth, similarities between the isotope fractions should be more pronounced.

More analyses of different elements within lunar samples - and a great deal more computer simulations that result in a Moon like our own - will be needed to settle the debate.