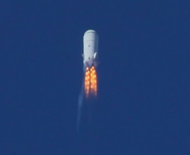 The space industry is the place to be for anyone interested in an exciting fun filled career. No, Milton is not taking applications at this time. But he promises to give a boost to those looking for a future in space exploration and focus their energies and schooling in those fields of science, he does have connections in higher places, so he claims. This is the century that humans break free from the nest and test their wings for windless flight into the playground where the gods play. Exciting times lay ahead for those willing and able to make the commitment to Space.


Blue Origin wants to fly under the radar all the way into space.


The secretive private spaceflight firm, which was established in 2000 by Amazon.com founder Jeff Bezos, is developing systems to launch astronauts to both suborbital and orbital space. While Blue Origin releases details about its plans and progress sparingly, the company's basic business model has come out.

It all revolves around reusable rockets and spacecraft, developed in incremental steps.


"It's really about developing and using vertical powered landing to drive reusable systems that can increase reliability and lower cost," Rob Meyerson, the company's president and program manager, said in a rare public presentation last September at a conference in Long Beach, Calif.


"We believe our incremental, long-term approach is going to develop the systems and technologies and vehicles that'll result in safe and affordable human spaceflight," added Meyerson, who spoke at Space 2011, a meeting organized by the American Institute of Aeronautics and Astronautics. [Photos: Blue Origin's Secretive Spaceship]


Blue Origin is one of four companies that have received funding through NASA's Commercial Crew Development (CCDev) program, which seeks to spur the advancement of American private spaceflight capabilities. The other three firms are Boeing, SpaceX and Sierra Nevada Corp.

CCDev's goal is to help get a handful of companies up and running as soon as safely possible, so the United States has its own way to send astronauts to the International Space Station and other destinations in low-Earth orbit. Since NASA's space shuttle fleet was grounded in 2011, the nation has relied on Russia's Soyuz vehicles to perform this taxi service.


Blue Origin got $3.7 million in 2010 in the first round of grants, called CCDev-1, and another $22 million last year under CCDev-2. The company is designing, developing and testing systems for both suborbital and orbital human spaceflight. [Blue Origin's Secretive Space Vehicle Explained (Infographic)]


"We're beginning with suborbital as a means to gain that experience, gain that practice that'll lead on to orbital human spaceflight," Meyerson said.


Blue Origin's suborbital vehicle is called New Shepard. The name is a nod to NASA astronaut Alan Shepard, who became the first American in space when he launched on a brief suborbital flight on May 5, 1961.


New Shepard consists of two reusable parts: a crew capsule and a propulsion module. A few minutes after liftoff, the propulsion module separates and heads back to Earth, eventually making a vertical, rocket-powered landing near the launch site (Blue Origin's private spaceport about 25 miles north of tiny Van Horn, Texas).


The crew module, which is designed to carry three or more people, coasts on to the edge of space before returning to Earth as well, its descent slowed by parachutes.


Blue Origin envisions multiple uses for New Shepard. It could carry tourists interested in experiencing microgravity and seeing the curvature of Earth against the blackness of space. The company also hopes scientists will book flights on the vehicle to take experiments up to space.


When it's fully developed, New Shepard should allow people to get to space relatively quickly and efficiently, according to company officials.


"The system design is optimized for rapid turnaround with a very small ground crew," Meyerson said. "We're talking tens of people, as opposed to thousands in previous reusable vehicles."


Blue Origin has conducted a handful of flights with suborbital test vehicles since 2006, including two in 2011. The second of last year's flights, which took place on Aug. 24, resulted in failure; the "PM2" vehicle crashed after reaching an altitude of about 45,000 feet (14,000 meters).


Blue Origin is also working on a manned vessel for orbital flight, a biconic craft called the Space Vehicle (SV).


"This development builds on our suborbital New Shepard crew capsule development," Meyerson said. "The lessons we learn in that program roll directly into the SV, the orbital system development."


The Space Vehicle is designed to transport up to seven astronauts to low-Earth orbit, though it can also carry a mix of cargo and crew, Meyerson said. When the spaceship comes back to Earth, Blue Origin wants it to touch down on land, with water landings as a backup.


Blue Origin is designing a reusable first-stage booster to help get the Space Vehicle to orbit. Like New Shepard's Propulsion Module, this rocket will return to Earth and make a vertical, powered landing.


"Then the orbital booster can be refueled and launched again, allowing improved reliability and lowering the cost of human access to space," Blue Origin officials write on the company's website.


Blue Origin doesn't release schedules or timelines of its projected progress. But Meyerson said the Space Vehicle might be ferrying astronauts to and from the space station in less than five years if all goes well.


"In our proposal with the government funding that we laid out, we believe [operations could begin] between 2016 and 2018," he said.
Posted by Lou at 9:19 AM