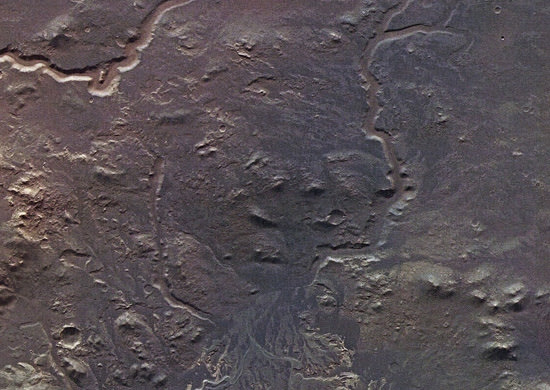 The only thing not flowing is the truth of what is going on on Mars. Mars has activity and life, some very strange life and not so strange like the Wookiee. Not only are scientists keeping a tight lid on what mars is but so is the media. No one wants to rock the cradle and wake up the sleepy-heads.

Flow-like features on Mars are a source of debate among scientists. While some experts say they are likely produced by liquid water or brine on the Red Planet's surface today, other investigations interpret some of these features as dry mass movements, stirred up by various other processes.


Whatever the cause, these slope streaks — called Recurring Slope Lineae — represent the movement of mass down slopes on the surface of our neighboring planet. They are among the few known examples of current geologic activity on Mars.

Many scientists agree that water likely flowed across ancient Mars. However, whether it exists as a liquid on the planet's surface today is arguable.

The head-scratching phenomenon sparked a lively debate on what's behind the strange slope processes on Mars during last week's 43rd Lunar and Planetary Science Conference in The Woodlands, Texas. [Photos: The Search for Water on Mars]

SPACE.com spoke to several scientists involved in the research, who gave us a glimpse into what may be happening on Mars.

Conditions are such on present-day Mars that, at certain locations at certain times of year, liquid water should be capable of existing for short amounts of time, according to Jim Head and Jay Dickson of the department of geological sciences at Brown University in Rhode Island.

The best evidence that water currently exists there comes from the recent discovery in the southern mid-latitudes of Recurring Slope Lineae, or RSL for short.

Dickson and Head described their research findings, showing that identical features are found on the equator-facing wall of the South Fork of Upper Wright Valley in the McMurdo Dry Valleys of Antarctica.

"If this is correct, then RSL on Mars may represent the surface expression of a far more significant ongoing drainage system on steep slopes in the mid-latitudes," the team said.

In research led by Norbert Schörghofer, of the University of Hawaii's Institute for Astronomy in Honolulu, a selected study site on Mars revealed the coming-and-going nature of slope streaks.

"For the first time we see an approximate balance between faded and new streaks," Schörghofer said. "The rate of formation and rate of fading are nearly equal, revealing that the number of slope streaks on the surface of Mars is approximately constant rather than increasing with time. This indicates the streak population is balanced."

The average lifetime of slope streaks, from time of formation until they disappear, and the turnover time of the slope streak population, are estimated to be four decades, Schörghofer said. Slope streaks fade gradually over time, with "islands of persistence," and are not obliterated by planet-encircling dust storms.

So, what on Mars is actually going on?

A formidable tool in helping to spot and catalog these confounding features is NASA's Mars Reconnaissance Orbiter, or MRO, now circling the Red Planet.

"This is complicated," said Alfred McEwen, a planetary geologist and director of the Planetary Image Research Laboratory at the University of Arizona in Tucson."Lots of stuff moves down steep slopes on both Earth and Mars." McEwen is principal investigator of the High Resolution Imaging Science Experiment (HiRISE) on the MRO.

On Mars, there are several rolling and tumbling categories, McEwen told SPACE.com:


"Folks can invoke water for all of the above if they like water. But given the thermodynamics," McEwenadded, "it is extremely unlikely except, maybe, for the RSL. They all have excellent non-water explanations except the RSL. Maybe the RSL will eventually prove to have a dry explanation as well."