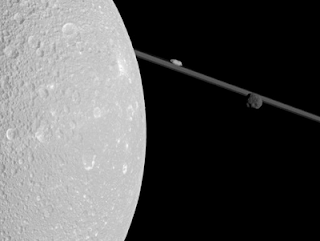 A motley crew of Greek gods having earned Saturnian moon names, three are shown in the picture. Dione, the big moon and Epimetheus and Prometheus. Too bad the stars are missing, not captured by Cassini, otherwise the view would be too much for mere immortals stuck in 3D mode to bear, well if you happened to be there, that is. Dione, mother of Aphrodite and a Uranus taboo, and Epimetheus and the Pandora plague, what would we do without interesting Greek gods to breath intrigue into our planetary system.

Flying past Saturn's moon Dione, Cassini captured this view which includes two smaller moons, Epimetheus and Prometheus, near the planet's rings in this NASA handout photo dated December 12, 2011. This encounter was the spacecraft's closest pass of the moon's surface.

I loved spending the night at Karen Dickovics’ house back in 3rd grade because her dad was a great storyteller. The Greek myths were his specialty. He’d turn out the lights and spin the fantastic tales of the gods and goddesses up on Mt. Olympus. Better than any soap opera.
I much prefer this creation story to the one about Adam & Eve:


In the earliest days, it is said that the Gods fought constantly.Their fights raged not only on Mt Olympus but all over the earth, which they had turned into a barren wasteland.
Zeus, who was the king of the Gods, thought it was time to do better by Earth and give her some living creatures. He called in two especially creative gods, the brothers, Prometheus and Epimetheus. He said, “OK guys – get down there, find yourselves a nice muddy river bank and use that clay to make some creatures… Oh and while you’re at it, give them some of these…” and he handed them a generous collection of talents and skills and tools – which they were to give to their new earthly creations.
So the two brothers went down from the gods’ home on Mt. Olympus to the Earth. They found themselves a river with excellent clay banks and set about their work. Epimetheus quickly slapped together all kinds of animals – some tiny, some huge, some with feathers, some with scales, some with long necks, some with strong legs.
Prometheus worked much more slowly and carefully because he was modeling men … in the shape of the gods. Because Epimetheus finished his job before Prometheus did, he was first to dip into the bag of gifts Zeus had sent for their creations. Wouldn’t you know, he gave his animals all the best gifts in the bag. Some of the animals got the gift of speed so they could run really fast. He gave others the gift of flying thru the air, some the gift of breathing and swimming underwater. He also gave many of them thick coats to keep them warm in winter.
Prometheus was left with little to give the men he’d made. He felt really bad because they couldn’t run as fast as the animals, nor could they smell or see as well. Worst of all, they were so naked they were freeezing.
He went back to Zeus and asked him if at the least he might be able to share the gods’ sacred fire with his shivering creations. But Zeus said, “No way Jose. Or whatever your name is. If your people get fire they’ll become too powerful.”
Because Prometheus couldn’t bear to see his people suffering, he decided to steal fire, even though he knew he’d get hell from Zeus when he found out.
He went up to Mt. Olympus and while the gods were sleeping, he took a glowing ember from the sacred hearth. He hid it in a hollow fennel stalk, which he pretended was a walking stick and carefully snuck down to earth with it.
The men of earth were so happy – at last they could be warm. They could have light after the sun went down and they could make tools. Instead of ripping at raw meat they could eat barbecued shish-kabob.
Zeus was furious when he first saw the fires on earth – furious with Prometheus and furious with the men below. They already looked like smaller versions of the gods – he didn’t want them to have god-like powers too!
To punish Prometheus Zeus had him chained him to a huge rock way off in the high and lonely Caucasus Mountains for hundreds of years. But that is a story for another day.
With Prometheus out of the way, Zeus turned his attention to punishing the happy-go-lucky men of the earth.
You remember Epimetheus, Prometheus’s brother? Well, he was now living on earth among men. (I forgot to say that up to now there were no women on earth.) So Zeus had a beautiful young woman named Pandora created out of clay and brought her down to keep Epimetheus company.
Epimetheus was ecstatic. Life was finally perfect, as far as he was concerned. And for awhile the couple was ever so happy with their perfect life.
But as Zeus had anticipated, Pandora soon got bored with a life in which everything was perfect.
The next time Epimetheus came up for a visit to Mt. Olympus Zeus gave him a gift to bring Pandora. It was a beautiful chest. Perfect for a coffee table; cheaper than Ikea. “Give this to Pandora with my love,” Zeus said, “but tell her that under NO circumstances should she open the lid.”
Of course, Pandora LOVED the box, and promised Epimetheus never ever to open it. However, she couldn’t help but notice that Zeus had not put a lock on it… Hmmm. Maybe someday when Epi was out with the guys??
Indeed one day Epimetheus went off to drink mead with his buddies, leaving Pandora alone with the box. And of course we know what she did as soon as Epimetheus was out of sight.
She opened the box.
The instant she lifted the lid, Zeus’s revenge was complete. All the miseries of this human life flew out – all manner of poxes and plagues, pain and poverty, anger and hate, jealousy and sadness.
Pandora was horrified and tried to shut the lid but it was too late. The afflictions were off and gone to the four corners of the Earth and there was no getting them back. She finally got the lid back down and just sat on the box in abject misery, wondering what to do.
It was then she heard a whimper and a scratching from inside the box, and a voice pleading “Let me out!!”
At this point, she thought, what did one more affliction matter?? So she opened the lid again and lucky for us all, out flew HOPE.