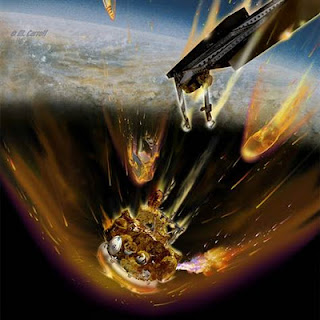 Dozens of probes and secret ships sent to Mars have bit the dust, to put it mildly. Mars isn't known as a war planet for nothing. The fact that a few American obscure missions were allowed should pose intriguing questions.

A failed probe that was designed to travel to a moon of Mars but got stuck in Earth orbit has crashed into the Pacific Ocean, Russian officials said Sunday.
The unmanned Phobos-Grunt probe was one of the heaviest and most toxic space derelicts ever to crash to Earth, but there were no reports of injury or damage. There's a good chance that no one actually saw the spacecraft's fiery plunge.


"Phobos-Grunt fragments have crashed down in the Pacific Ocean," the RIA-Novosti news service quoted Alexei Zolotukhin, a spokesman for Russia's aerospace defense forces, as saying. The debris zone was said to be 775 miles (1,250 kilometers) west of Wellington Island in the South Pacific. Re-entry was estimated to occur at about 12:45 p.m. ET, based on the data received by the Russians.
In a Twitter update, the European Space Agency said several sources confirmed that estimate but added that experts were still checking the details. A later RIA-Novosti report quoted an unnamed source as saying the probe may have continued farther along its orbital track and crashed in Brazil or into the Atlantic Ocean.
Russia's Roscosmos space agency predicted that only between 20 and 30 fragments of the Phobos probe with a total weight of up to 440 pounds (200 kilograms) would survive the re-entry and plummet to Earth. Heiner Klinkrad, head of the European Space Agency's Space Debris Office, agreed with that assessment, adding that about 100 metric tons of space junk fall on Earth every year.
"This is 200 kilograms out of these 100 tons," he told The Associated Press.
Thousands of pieces of derelict space vehicles orbit Earth, occasionally posing danger to astronauts and satellites in orbit, but as far as is known, no one has ever been hurt by falling space debris.
Phobos-Grunt weighed 13.5 metric tons (14.9 English tons), and that included a load of 11 metric tons (12 tons) of highly toxic rocket fuel intended for the long journey to the Martian moon of Phobos. It was left unused as the probe got stuck in orbit around Earth shortly after its Nov. 9 launch.
Roscosmos said all of the fuel would burn up on re-entry, a forecast Klinkrad said was supported by calculations done by NASA and ESA.
The space era has seen far larger spacecraft crash. NASA's Skylab space station that went down in 1979 weighed 85 tons (77 metric tons), and Russia's Mir space station that deorbited in 2001 weighed about 143 tons (130 metric tons). Their descent fueled fears around the world, but the wreckage of both fell far away from populated areas.
The $170 million Phobos-Grunt mission was Russia's most expensive and the most ambitious interplanetary endeavor since Soviet times. The spacecraft was intended to land on the crater-dented, potato-shaped Martian moon, collect soil samples and fly them back to Earth, giving scientists precious materials that could shed more light on the genesis of the solar system.

Russia's space chief has acknowledged the Phobos-Grunt mission was ill-prepared, but said that Roscosmos had to give it the go-ahead so as not to miss the limited Earth-to-Mars launch window.
Its predecessor, Mars-96, which was built by the same Moscow-based NPO Lavochkin company, also suffered an engine failure and crashed shortly after its launch in 1996. Its crash drew strong international fears because there were 7 ounces (200 grams) of plutonium onboard. The craft eventually showered its fragments over the Chile-Bolivia border in the Andes Mountains, and the pieces were never recovered.
The worst-ever radiation spill from a derelict space vehicle came in January 1978 when the nuclear-powered Cosmos 954 satellite crashed over northwestern Canada. The Soviets claimed that the craft completely burned up on re-entry, but a massive recovery effort by Canadian authorities recovered a dozen fragments, most of which were radioactive.
Phobos-Grunt also contained a tiny quantity of radioactive cobalt-57 in one of its instruments, but Roscosmos said it posed no threat of radioactive contamination.
The spacecraft also carried a small cylinder with a collection of microbes as part of an experiment by the California-based Planetary Society that designed to explore whether they can survive interplanetary travel. The cylinder was attached to a capsule that was supposed to deliver Phobos ground samples back to Earth.
It's not clear whether or not that capsule could have survived re-entry, but there's virtually no chance that it will ever be found.
Posted by Lou at 8:45 AM