Russia Accuses the U.S. of a Secret Mars Plot 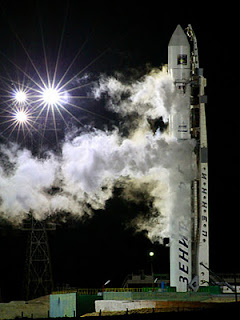 Nothing like a good old cold war in space to get countries off the ground and into space. America has hotels on Mars and a thing or two on Phobos, sure they are secret, not even Americans know about them.  So what else is new.


Oh Russia, you used to do paranoia so much better. The Evil Empire got its name in part because of its nasty post–World War II habit of gathering up little, nearby countries — countries that didn't strictly want to be gathered up — in order to build a buffer on its western flank. That was un-neighborly, but at least understandable. You try living next to Germany for the first half of the 20th century and see if you don't double-lock the door.


But the Cold War is over, Germany's been housebroken, and there's less need than ever to see hostile foreigners lurking behind every bush. You wouldn't have known that this week, however, listening to Vladimir Popovkin, director of Roscosmos, the Russian space agency.

It's been a bad couple of months for Roscosmos, ever since an ambitious Russian Mars probe was launched on Nov. 9, headed to the Martian moon Phobos to collect and return a sample of extraterrestrial rock and soil. The ship, named Phobos-Grunt (or Ground) fell a wee bit short of its target, never making it out of Earth's orbit after an upper stage booster failed. Now, as all things stranded in low Earth orbit must, the probe is headed home, set to re-enter the atmosphere and break apart sometime between Jan. 14 and 16. The best estimate so far is that the precise moment of impact will be 1:18 p.m., Moscow time, on Jan. 15, and the precise place will be the Indian Ocean. (See "Can Russia Fix Its Crippled Mars Probe in Time?")

In announcing this news on Tuesday, however, Popovkin couldn't resist deflecting the blame for the mission's failure, suggesting — with an exquisite lack of subtlety — that the mission may have been sabotaged by another country (America, we're looking at you) using an antisatellite weapon. "We don't want to accuse anybody," Popovkin said, accusing somebody, "but there are very powerful devices that can influence spacecraft now." In case you were wondering, that's Russian for "I'm just sayin'."

O.K., so what exactly is Popovkin's claim? It's true that when Russian spacecraft fail very early in their missions — just as they're getting their footing in orbit — the problems often occur when craft are flying over the western hemisphere, where any imagined skeet-shooting from the U.S. could take place. "The frequent failure of our space launches," he told the newspaper Izvestia, "which occur at a time when they are flying over the part of the Earth not visible from Russia, where we do not see the spacecraft and do not receive telemetric information, are not clear to us."

Maybe, but they should be. It's a basic rule of orbital mechanics that if you want to adjust your flight path when you're on one side of the planet, you have to begin the maneuver while you're still on the other side. Accelerate when you're over the western hemisphere and your altitude will increase by the time you're over the eastern. Decelerate and you'll be flying lower half a revolution later. By definition, Russia's key early maneuvers in any flight must thus take place while they're flying through our orbital neighborhood — just as ours take place while we're flying through theirs.

None of that means we're responsible for the breakdowns — or that we'd even have the technical capability for such meddling. That didn't stop another Russian official, Nikolai Rodinov, who once oversaw the country's strategic early warning system, from suggesting that powerful electromagnetic impulses — a nicely vague but just-plausible-enough weapon — were to blame. (See TIME's photo-essay "Russia Launches a Manned Rocket in a Snowstorm.")

It's worth noting that the U.S. would have nothing to gain and a whole lot to lose by monkeying around with a Russian Mars probe — especially since we're now dependent on Roscosmos rockets to ferry us to the NASA-built International Space Station. Offend our designated driver and we could be left without a lift. It's worth noting, too, that Roscosmos hardly needs us to help them not get to Mars. Since 1960, Russia has launched 19 missions to the Red Planet and has had precisely 19 partial or total failures. Five missions did achieve a portion of their goals — putting a Martian satellite in orbit but failing to get a lander to the surface, for example — but none have been unalloyed triumphs. The U.S. has had its own Martian disasters in the past, but it's had a six-mission winning streak going since 2001, with a seventh Mars ship on the way now.

The loss of Phobos-Grunt is equally big for space science as a whole. A sample return mission has been in NASA's long-term plans for years, but budget constraints have caused the agency to postpone the project repeatedly. Space watchers in both the U.S. and Russia were rooting for this mission to succeed — as was China, which had a small Martian orbiter riding along. All of that will crash and burn — literally — within a few days. Traveling to Mars has always been a very, very hard thing to do, and it will continue to be. You don't need an imaginary U.S. plot to make that so.