Newt's moon colony: What would it cost? 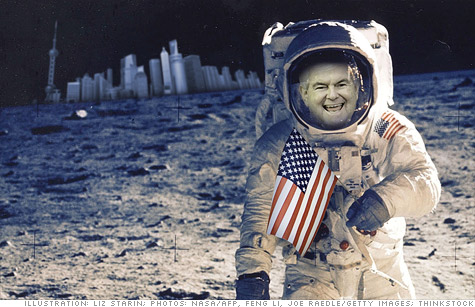 I'm not endorsing Newt, but he is the only one talking seriously about making space exploration easier for private industry to get their foot in the door. Every one talks about cost but everything worthwhile cost money to get things off the ground. The space industry will make money and create jobs and opportunities ten fold more than it will cost.

The payback is enormous concerning economic well being for untold numbers of humans, and everyday people will have a shot of actually going into space and into the playground of the gods for Pete's sake.

There are many so called people that don't want us to go into space, preferring that humanity stagnate and rots on the vine, and they will be a tough crowd to overcome.

NEW YORK (CNNMoney) -- Newt Gingrich wants to build a permanent colony on the moon and, if his dream is fully realized, the price tag could be huge.
The Republican presidential candidate has repeatedly defended his goal to establish a "permanent lunar colony on the moon" by the end of his second-term as president -- if he is elected. Gingrich said he wants to eventually turn the moon into a bustling tourist destination, and hopes to use it for commercial purposes, including science and manufacturing.


His competitors have mocked the idea in debates. Mitt Romney, for example, said he would rather spend money creating jobs in America than on the moon.
But Gingrich has stuck to his guns, saying the initiative will spur innovation and show the world that America is not giving up on space exploration.
"I do not want to be the country that having gotten to the moon first, turned around and said, 'It doesn't really matter, let the Chinese dominate space, what do we care?' I think that is a path of national decline, and I am for America being a great country, not a country in decline," Gingrich said at the Republican debate in Jacksonville, Fla. Thursday evening.
Dominating space will be costly. In 2004, when President George W. Bush introduced a space exploration initiative that aimed to establish a base on the moon (among other goals), costs were projected to be about $100 billion through 2020. President Obama, however, canceled the mission in 2010, because it was running behind schedule and was costing too much money.
Plus, NASA's tab would have probably been much higher than $100 billion by the time it completed its mission and built a moon base, said John Logsdon, professor emeritus at George Washington University and founder of the school's Space Policy Institute. He says a similar mission today could cost somewhere between $250 billion to $500 billion.
Rich, Gingrich and crazy rich
Not only would such an initiative involve developing a rocket to transport people and resources to the moon, it would also entail establishing an inhabitable outpost to hold up to 10 people, he said.
The outpost would be much like those the United States sets up in places like Antarctica, "where people are living in severe conditions, but the difference is you can't go out and breathe the air," said Logsdon. Americans living at the outpost would be there to research and explore the resources on the moon.

But Gingrich doesn't want to stop at a research base, saying during a speech in Florida last week that once there are 13,000 people on the moon, "they can petition to become a state."
"Depending on what kind of rockets they use and what kind of outpost is built, a really big buildup of large-scale settlements on the moon could cost in the trillions over many, many years," said Logsdon.
Of course, Logsdon said, it's impossible to form a precise estimate because Gingrich has left many of the details foggy -- including how many people would make up the colony -- and because many of the products the mission would use may not be invented yet.
The Gingrich campaign did not return requests for comment.
Since Gingrich has attributed much of the United States' failure to return to the moon to the bureaucracy of NASA, he will likely try to reduce the space agency's traditionally-high costs by encouraging more private-sector development and revamping the way NASA operates, said Edward Ellegood, a space policy analyst at Embry-Riddle Aeronautical University.
"If you take the route NASA has developed, the cost would be very high, but it seems that Gingrich is asking you to throw your current concepts of space exploration out the window ... It sounds like he would completely change the way NASA does business and hopes to reduce costs by doing this," said Ellegood.
Could we actually live on the moon? Because of health concerns, moon residency would likely be temporary at first, said Mike Gold, a director of operations at Bigelow Aerospace, which develops spacecrafts and inflatable space station modules.
"People will want to avoid too much exposure to radiation and microgravity and won't want to lose the ability to live on Earth, so some sort of rotation of personnel is likely," Gold said.
Who's backing the GOP candidates?
Lunar ice could potentially be used to supply water, air and even rocket fuel to a "lunar settlement," which could lower costs of transporting resources to the moon, he said. Gold is also optimistic that massive deposits of Helium 3, an element found on the moon, could become a significant source of energy for use on the moon and on Earth in the future.
"It's a mistake to laugh at Newt Gingrich and discount the concept of a Lunar Base. This isn't funny, this is the future," said Gold. "People I'm sure mocked Columbus and early explorers at the time and how did that work out?"
Posted by Lou at 1:24 PM