International Space Station Commander Dan Burbank captured spectacular imagery of Comet Lovejoy as seen from about 240 miles above the Earth’s horizon on Wednesday, Dec. 21. Burbank described seeing the comet as “the most amazing thing I have ever seen in space,” in an interview with WDIV-TV in Detroit. 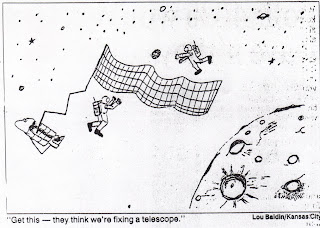 I sent the drawing above that I made about the space shuttle and the mission to fix the Hubble telescope to the The Kansas City Star newspaper. They published it on December 19, 1993.


The point I was making was that working in space is not work at all, it's play, fun, and a supernatural adventure...And some very lucky people are paid to do that so-called work for a living...and what a living it is.