NASA probes to arrive at the moon over New Year's 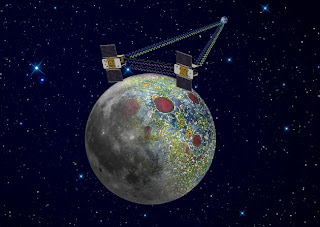 To say the least, the moon is a fantastic wonderland getaway for the privileged few that get to play up there, especially on the dark side, the side humans aren't allowed to see with their home based telescopes. The side facing Earth has plenty of hidden activity too. The moon is not two moons that merged eons in the past as suggested by this article.

LOS ANGELES (AP) — The New Year's countdown to the moon has begun.


NASA said Wednesday that its twin spacecraft were on course to arrive back-to-back at the moon after a 3½-month journey.

"We're on our way there," said project manager David Lehman of the NASA Jet Propulsion Laboratory, which manages the $496 million mission.


The Grail probes — short for Gravity Recovery And Interior Laboratory — won't land on the lunar surface. Instead, they were poised to slip into orbit to study the uneven lunar gravity field.


Lehman said team members won't celebrate until both probes are safely in orbit.


It's been a long voyage for the near-identical Grail spacecraft, which traveled more than 2½ million miles (3.22 million kilometers) since launching in September. Though the moon is relatively close at about 250,000 miles (402317.35 kilometers)away, Grail took a roundabout way to save on costs by launching on a small rocket.


Once at the moon, the probes will spend the next two months tweaking their positions before they start collecting data in March. The pair will fly in formation at an altitude of 34 miles (54.72 kilometers) above the surface, with an average separation of 124 miles (199.55 kilometers).


The mission's chief scientist, Maria Zuber of the Massachusetts Institute of Technology, said many aspects of the moon remain a mystery despite being well studied.

"We actually know more about Mars ... than we do about our own moon," Zuber said.


One puzzle scientists hope to solve is why the moon's far side is more hilly than the side that always faces Earth. Research published earlier this year suggested that Earth once had dual moons that collided and formed the moon that people gaze at today.


Despite the wealth of new knowledge expected from the mission, NASA has no near-term plans to send astronauts back to the moon. The Obama administration last year nixed the idea in favor of landing astronauts on an asteroid and eventually Mars.
Posted by Lou at 11:32 AM