Earth has more than one moon, astronomers confirm 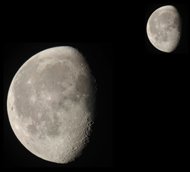 Earth gets mooned twice, how nice. It's amazing how much we humans don't know what is going on in our backyard, a few miles above the Earth, yet we think we have an inkling of what is going on with the furthest planets, and other star systems in this galaxy.

We get mooned more than twice in any given month, more like dozens of times by rocky and not so rocky things that can go bump in the night...sky.


Researchers at Cornell University say that what we know as the Moon is in fact not the only one orbiting our planet at any given time. Smaller objects regularly inhabit the Earth's orbit, usually leaving after a few months to continue on their celestial journeys.

The discovery is considered a major breakthrough for space research because scientists had been working toward visiting asteroids outside of Earth's orbit for research. While these temporary moons are too small for a shuttle landing, they are prime for research from a relatively close distance.

However, it's still to be determined whether the announcement will capture the public's attention like previously revealed New Moons. Either way, it should be a decidedly more pleasant experience for all involved.

The new paper titled "The population of natural Earth satellites," from Cornell University's Mikael Granvik, Jeremie Vaubaillon and Robert Jedicke states that these "secret moons" enter and exit the Earth's orbit without notice.

"At any given time, there should be at least one natural Earth satellite of 1-meter diameter orbiting the Earth," Granvik writes.

Scientists have confirmed at least one such temporary moon, discovered by the Catalina Sky Survey in Arizona in 2006.

"Our results are consistent with the single known natural [temporarily-captured orbiter] 2006 RH120, a few-meter diameter object that was captured for about a year starting in June 2006," the report says.
Posted by Lou at 8:56 AM