China reveals its space ambitions for next five years 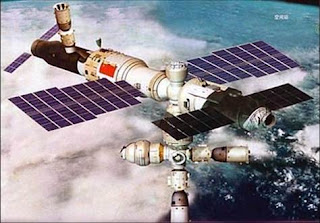 There is a heck of a lot of space up in space, plenty of room for everyone to get in on the fun and games. Competition is a good incentive to get the balls rolling upwards.


BEIJING — China plans to launch space labs and manned ships and prepare to build space stations over the next five years, according to a plan released Thursday that shows the country's space program is gathering momentum.


China has already said its eventual goals are to have a space station and put an astronaut on the moon. It has made methodical progress with its ambitious lunar and human spaceflight programs, but its latest five-year plan beginning next year signals an acceleration.
By the end of 2016, China will launch space laboratories, manned spaceship and ship freighters, and make technological preparations for the construction of space stations, according to the white paper setting out China's space progress and future missions.
China's space program has already made major breakthroughs in a relatively short time, although it lags far behind the United States and Russia in space technology and experience.
The country will continue exploring the moon using probes, start gathering samples of the moon's surface, and "push forward its exploration of planets, asteroids and the sun."
It will use spacecraft to study the properties of black holes and begin monitoring space debris and small near-Earth celestial bodies and build a system to protect spacecraft from debris.
The paper also says China will improve its launch vehicles, improve its communications, broadcasting and meteorological satellites and develop a global satellite navigation system, intended to rival the United States' dominant global positioning system (GPS) network.

China places great emphasis on the development of its space industry, which is seen as a symbol of national prestige.
Its space principles — including peaceful development, enhancing international cooperation and deep space exploration — are largely unchanged from its previous two documents detailing the progress of China's space missions, released in 2000 and 2006.
In 2003, China became the third country behind the U.S. and Russia to launch a man into space and, five years later, completed a spacewalk. Toward the end of this year, it demonstrated automated docking between its Shenzhou 8 craft and the Tiangong 1 module, which will form part of a future space laboratory.

In 2007, it launched its first lunar probe, Chang'e-1, which orbited the moon, collecting data and a complete map of the moon.
Since 2006, China's Long March rockets have successfully launched 67 times, sending 79 spacecraft into orbit.
Some elements of China's program, notably the firing of a ground-based missile into one of its dead satellites four years ago, have alarmed American officials and others who say such moves could set off a race to militarize space. That the program is run by the military has made the U.S. reluctant to cooperate with China in space, even though the latter insists its program is purely for peaceful ends.
"China always adheres to the use of outer space for peaceful purposes, and opposes weaponization or any arms race in outer space," Thursday's white paper states.
The Chinese government's policy is to "reinforce" space cooperation with developing countries and "value" space cooperation with developed countries. The paper lists cooperation between China and countries including Russia, Brazil, France and Britain, and says of the United States: NASA's director visited China "and the two sides will continue to make dialogue regarding the space field."