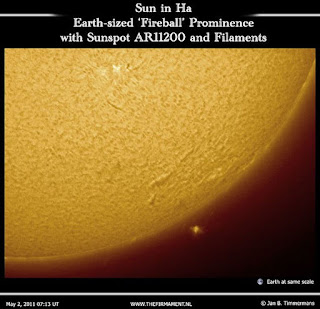 A FIREBALL THE SIZE OF EARTH: "When the sun rose on May 2nd, I was surprised to see a fully detached fireball prominence at the southwestern edge of the solar disk," reports amateur astronomer Jan Timmermans of Valkenswaard, The Netherlands. "Just imagine, a ball of fire with the size of the Earth thrown high in the solar skies!" "I was stunned," he continues. "The prominence was rather faint, so I had to use a lot of gain to capture it, hence the noise: 'more gain = more grain.' But I am pleased that I captured it!"


[vintage post from ufolou.com] May 2, 2011, the sun spit out an object of matter the size of Earth (more or less).  Two years earlier, on March 9, 2007, I post on ATS (http://www.abovetopsecret.com/forum/thread271627/pg1) that the sun spits out planets (matter). Most of the "matter" spit out by the sun is never seen by human equipment because of the rapid speed. What NASA does manage to capture is often not released to the public unless it has little significance.  Most of the "fireballs" and "filaments" fall back onto the sun and are what is sometimes captured by NASA equipment or in this case by an amateur sun watcher. What doesn't get captured are the "so called" filaments of sun matter that shoots far into the darkness of the solar system, and beyond, that eventually over time manifest into planetary matter, that goes undetected until the mass grows over the span of millions and billions of years; as the baby planets beef up on meteors, space dust, comets and other space materials, like cows fattening up while grazing on fields of grass.